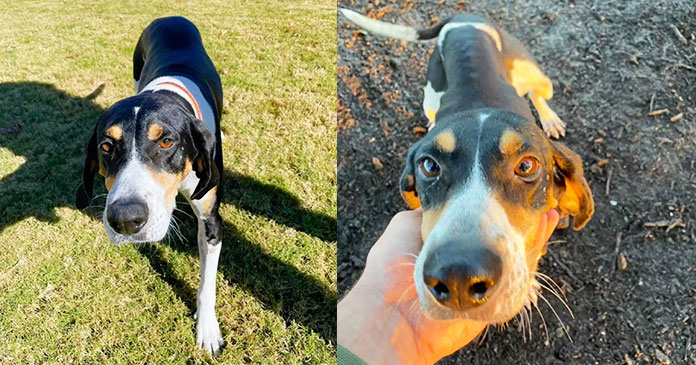 Sometimes the dogs suffer a lot. But still they remain calm and sweet. They forget the pain which they went through. The same thing happened to this dog. It was rescued by a kind man who was led to her by his dog. One day William Thomas Green got up early to take his dog which is a pittie named Cokie, to the dog park.

As they went into the park, he let go the dog off-leash and the dog went to the corner of the park. According to Green, the dog was staring at him and that made him to see what was there. As Green went there, he was shocked by what he saw. The dog led him to a dog which was sleeping in a muddy puddle.

It seemed like the dog was abandoned and she was very skinny and sick that she could not even stand. Green said that he immediately went back to his car and got the dog food and water. After eating, the dog was able to stand and she stood by the side of him.

After that, Green took the dog to the vet and she was diagnosed with heartworms and whipworms. The dog was very malnourished and it seemed that she was used for breeding in the past. The dog was named Lucky Lucy by Green. As the dog healed, it was taken to Huntsville, Alabama where the dog was introduced to the rest of his family.

Green said that his wife’s parents fell in love with her and they took her in. Now she is very happy and weighs around 60 pounds. Lucy now feels safe and comfortable. In the beginning for the first few weeks, she was very timid and she was not howling or barking.

But after some time she was able to adjust to the new life and she started trusting everyone in the family.
Both Cokie and Lucy are very good friends and they like to spend time together.

They play in the backyard and at the dog park. They behave like big sister-little sister. Green feels that he was at the right place at the right time and helped Lucy. It is good to know that she got the second chance at life.