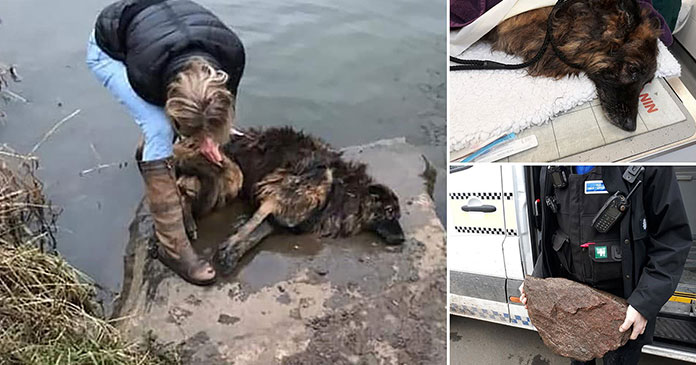 Sometimes the cruelty shown by the people to get rid of their pet makes us wonder whether we are human beings or not. How can we be so cruel to the animals? But if there are devils, there are angels also.

One dog actually suffered at the hands of his barbarous owner who in order to get rid of her did something very inhuman. The dog’s leash was tied to a rock and she was thrown into the freezing cold water of the river in Nottingham, England.

Passerby Jane Harper was on her morning walk in that area with her friend when they saw the head of the dog in the water. Without wasting a minute, Jane jumped into the icy cold waters of the river to save the dog, a Belgian Shepherd. Though she got hold of the dog, she was unable to pull the dog out of the murky water.

Then she saw a leash tied around her leg and that was tied to a rock which was submerged in the water.  She got her arm underneath and tried to lift her up. The dog with great difficulty tried to keep her head above the water.

The police came and took the dog to the veterinarian where she was checked and found to be in good health.  It was even found that the dog was microchipped and her owners were found.

The owner was arrested and presented before the court. Charlene Latham, 31 admitted that she tried to drown the dog.It is good to know that Bella the dog is doing well now.

How people could be so cruel to such voiceless creatures. They should be ashamed of themselves.