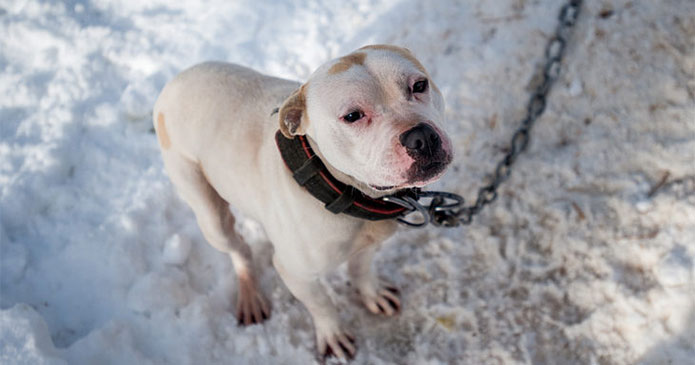 As it is getting colder day by day in the US due to the effect of Arctic freeze and snowstorms coming very often, so it becomes even more necessary to take care of our pets and protect them from harsh winter. Even the dogs who are fond of living outdoor are becoming vulnerable to frostbite and hypothermia.

During this period, if any dog is left out, it is the worst news. One such incident happened in Pittsburgh where one dog was left out in the cold on the second floor of an apartment balcony.

One of the concerned neighbors called the police and told how a pit bull is left out in the chilly weather. Three Pittsburgh officers made sure to save the dog.

They immediately arrived and found the dog wet, cold, and shaking. As they were unable to reach out to the dog, they got the help of the Pittsburgh Bureau of EMS Rescue 2. Once inside the house, the dog ran directly to the food and the warm bed.

The dog’s owner was babysitting and late than expected. So it was not possible for him to come in time.
Thankfully due to the timely help of the Pittsburgh police, the dog’s life is saved. The dog’s owner who preferred to remain anonymous was more than happy and described the service done by police as wonderful.

But police made it clear that it is against the law in the city of Pittsburgh to leave pets outside for more than 30 minutes unsupervised.

It’s a reminder to take extra care of the pets this winter. It is so cold outside that even the dogs who prefer to remain outdoor should be kept inside.