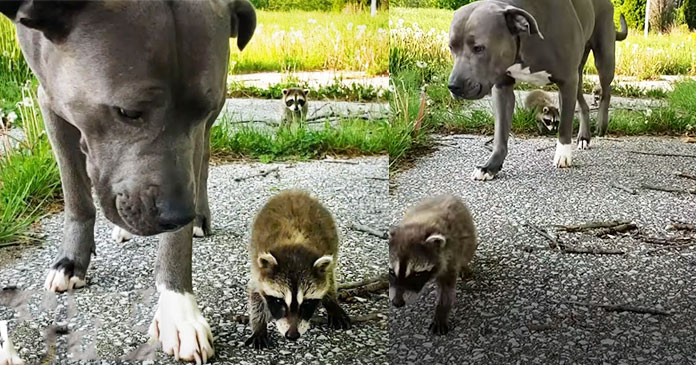 Animals are very loving and they never hesitated to help each other. Dogs are blessed with gentlest souls and they have proved it from time to time. Here is another incident to prove it.

When three baby raccoons lost their mother, they were helpless but they found the love and comfort they were seeking in a sweet dog named Ashlyn.

At first, the dog was a bit confused as it was a huge responsibility. But slowly the pit bull adopted the tiny creatures and cared for them as they were her own babies. The three raccoons named Rain, Storm, and Hailey were only some weeks old when they lost their mother. 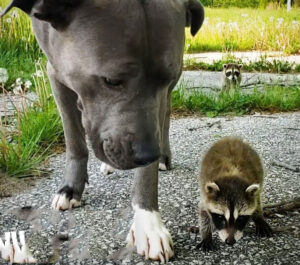 As they were alone and helpless, they took refuge in the backyard of the Canadian family. This move actually changed their life. At first, the kind family hand-fed the babies but then they thought Ashlyn can be a great adoptive mother and they wanted to give her a chance.

The family gave the responsibility of looking after the babies to Ashlyn.  At first, the dog was a little bit unsure but then slowly her motherly instinct came and she looked at them very well. Now they look like a big happy family. According to Katie, the dog’s mom, the dog Ashlyn was not really sure of the trio when they first arrived.

However, now that a few days have passed she had adopted them like they are her own puppies. Though they are very happy together, Katie and Ashlyn are preparing the babies how to live in the wilderness. They are wild animals and they have to go back to the wild. 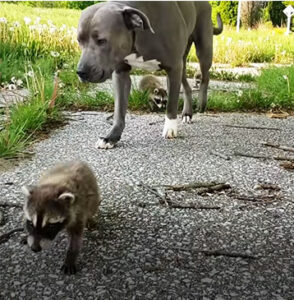 The family has even made an Instagram account of the three raccoons so that anyone who is interested could help them in their rehabilitation. What the family did for the raccoon babies is quite appreciative! We hope that the raccoons will soon be rehabilitated.