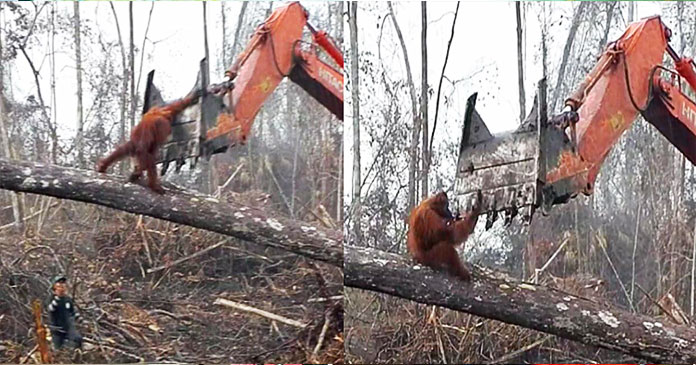 Logging has destroyed vast stretches of land making the wild animals homeless. The poor animals are made to take shelter elsewhere.

Left to nothing, sometimes these helpless creatures try to fight their opponent. Most of the time they don’t know who their opponent is and fight with the machines who are very powerful compared to them.

Like this Orangutan who was desperately trying to stop the digger with his hands as it had destroyed his home. In order to stop the excavator, the orangutan leaps down a large trunk and tries to cling to the cold metal but unfortunately, he slips and falls down into the pile of trees that were once his home.

The rain started to fall and the orangutan struggled to climb back again to fight with the digger who had destroyed his forest.

This heartbreaking scene which was caught on camera was in West Kalimantan, Indonesia where a section of the Sungai Putri Forest was destroyed for construction purposes. These forests are home to critically endangered Bornean Orangutans.

Fortunately, International Animal Rescue was informed and they came and were able to save the orangutan. They then relocated the Orangutan to a remote, protected area of forest.

Though the orangutan had been given the home the question is how desperate these animals are now and how far they are pushed at the hands of humans.

It is high time that we should remember this thing that the earth not only belongs to us humans, there are other species also. We should stop encroaching on their natural habitats.