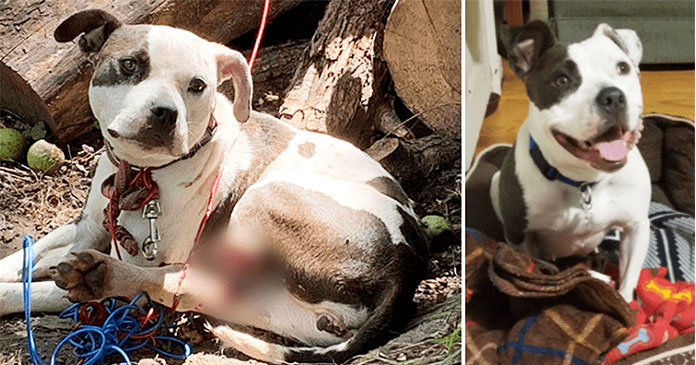 Sometimes dogs suffer a lot at the hands of human beings. They do not have to be treated the way they are treated. But the dogs who suffer a lot, in the beginning, are having a happy ending. According to Best Friends Animal Society, in a house in Saginaw, Michigan, a dog named Bella was found tied up with two steel cables by her owner.

The poor soul was kept alone and she was totally neglected with no shelter or food. She was not having any water and even the food was kept out of reach. Bella was so tied up in cables that she was unable to move. Like this many weeks passed away and she was completely neglected.

At last, a good Samaritan stepped in after hearing the cries of the dog but he was shocked to find a very pathetic scene, the dog was malnourished and dehydrated and even gnawed off her back leg to run away from there. When Saginaw County Animal Care and Control came there, they were shocked. 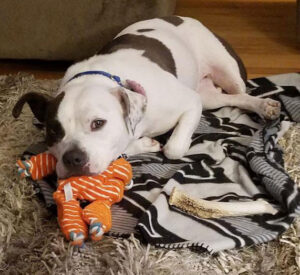 One of the officers named Desiree narrated that seeing that dog in that situation was gut-wrenching. The dog was rushed to vets who took full care of the dog and Best Friends says that despite everything, the poor neglected dog was having a positive attitude and she was wagging her tail.

For that treatment of Bella, her owner was found and charges were pressed. But the important thing was that Bella was safe and the custody was taken by the shelter and they started looking for a new home for Bella. She even started adjusting to her three feet.

She spent some time at the Saginaw County Animal Care and Control and then she was sent to Best Friends Animal Sanctuary to provide her the needed care. It was not easy to transport her from Michigan to Utah but Bella’s story was liked by people and they sponsored the trip.

Now Bella is having a very happy life as she was adopted by Kim Diehl and Jason Reding of Rockport, Illinois. They were attracted to Bella, the moment they met her. According to Kim, it was love at first sight. Bella was energetic and has such a bubbly personality. We are very happy for Bella. She deserved all the happiness of life.