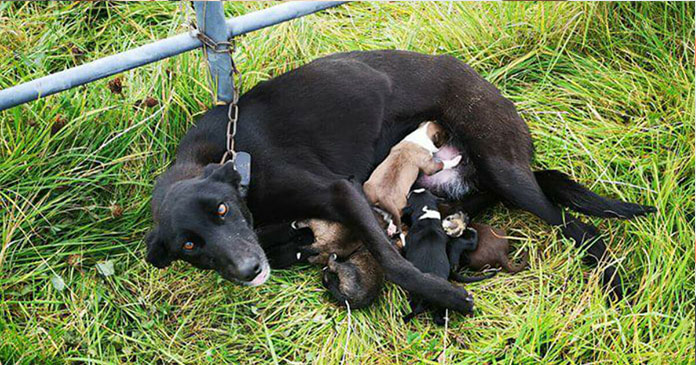 Sometimes humans behave in such a way that they put humanity to shame. We actually question how one could be so harsh to these voiceless creatures. If we can’t be good towards them we don’t have any right to be unkind to them.

One such story which highlights the inhuman act is here.  A two-year-old dog was found chained to a fence in the field in Elphin which is a small town in County Roscommon, Ireland. It seemed as the dog had been abandoned by someone with six newborn puppies who were not even able to open their eyes properly.

They were left there without any food and water and so they were cold and hungry. The mother dog though restricted by the chain yet was trying to look after her babies.

It was sheer luck that a walker saw the animals and called the police and ISPCA for help. Soon help came and the poor animals were taken to the vet for treatment in Longford.

Fortunately, the dogs did not show any health issues and they were fit but they had to be kept there for a while. After this story was shared on Facebook by ISPCA, people were really very angry and showed their anger.

The mother dog had been named Emmy Lou and even the six puppies were also given names -Billy, Ray, Dixie, Dolly, Dotty, June, and Patsy. The family will live for some time under the care of ISPCA until they find a forever home.

We are happy that the dog and her family are saved but what with the number of other animals who tolerate it. It is difficult to accept that someone could leave the dogs in such an inhuman way.