if we look at the kindness shown around us, sometimes we feel that this world is full of kind people. They don’t wait for anyone and just go with their instinct and help an animal in need.

Dandon Miller is one such kind person who was riding his bike on a highway in Pennsylvania, on Memorial Day weekend when he saw something strange in the middle of the road. It was a badly injured bald eagle lying there. 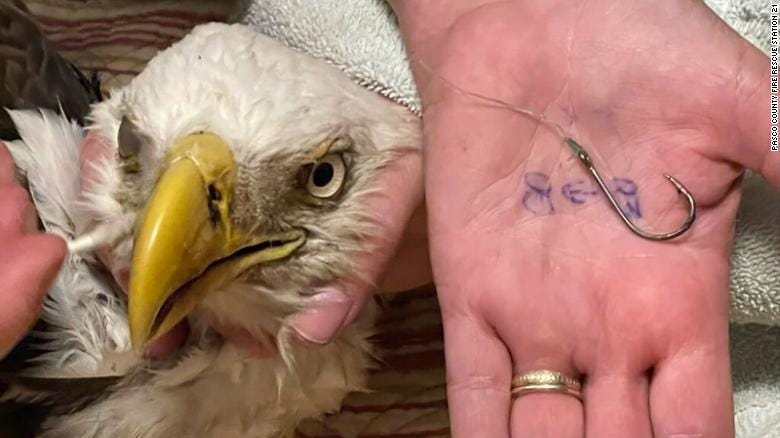 According to Miller, he saw everyone was stopping to see something and it was then that he saw the bald eagle in the middle of the road. He added one person even nudged it to see whether the bird was able to walk off the road or fly away. Though the bird spread her wings yet she was not able to fly.

At that time the motorcyclist called 911 and he was told to the Tri-State Bird Research and Rescue, which is a bird rehabilitation center located there. Miller knew that he had to be very careful as he did not want to increase the injuries of the bird.

Fortunately, on that day, he was wearing a black and red flannel shirt over a t-shirt. He took off the flannel shirt, wrapped the bald eagle in it, and then gently picked her up. 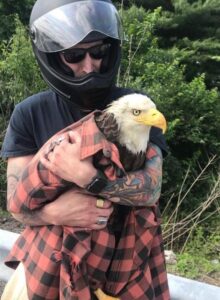 Miller said that he was just trying to keep the bird calm and make sure that she was secure and he was not going to drop her or harm her. He further said that it was really amazing to hold that bird and also the bird was really calm.

At the center, rescuer Rebecca Stansell looked after the bird and it was quite fortunate that her injuries were mostly superficial. According to Stansell, the bird had a mild injury to one eye and soft tissue injuries but there were no broken bones.

She was under the supervision of a wildlife veterinarian and it was expected that she would make a full recovery. Now the bird is on the road to recovery and the credit for it goes to Miller.