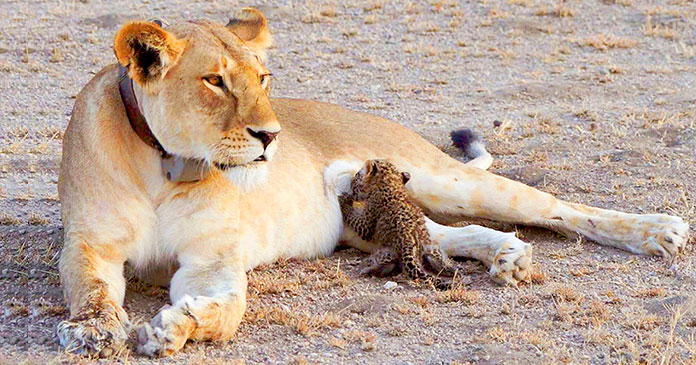 Mostly lions and leopards at the Gir National Park, India did not get along very well. Stotra Chakrabarti, a researcher who studies animal behavior says that lions and leopards compete with each other for space and food and they are at odds.

This statement holds the truth. But there are always exceptions and here is one particular lion which against all odds broke the barrier when she adopted a baby leopard.

This case is very rare and unique where interspecies adoption involves. A sick baby leopard was looked after and cared for by a lioness as if he were her own. 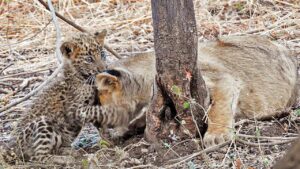 Though these animals compete with each other for food and space yet the lioness went against the rules and took pity on a sick two-month-old leopard cub.

The cute young pup was nursed and taken care of by the lioness for weeks. The mother lioness did her best to feed and care for him. But unfortunately, the baby leopard passed away.

The interesting thing to be noticed here is that the lioness even had two cubs of her own. But this thing did not discourage the mother lioness and she looked after the poor baby leopard as if he were one of the family.

Earlier everybody thought that this association would not last long. It was expected only for a day or two but it went on for a month and a half. The lioness shared meat that she hunted with the baby leopard.

Even the new siblings were playing with him and they used to follow him up trees. According to the researcher who had been studying the lions for nearly seven years, this adoption was surely the most wow moment he has witnessed.

Sadly the relationship ended soon as the baby leopard died due to the hernia that he had since birth. Had the baby leopard were alive, it would be interesting to know how he would have reacted when he grew up.