A wildlife photographer Jean-Francois witnessed the dramatic rescue of a lion cub by his mother in Africa. The baby lion cub fell over the edge of a sheer cliff. Fortunately, the lion cub became caught so that he didn’t fall straight to the bottom of the cliff.

As the baby lion cried out in fear and panic, his mother and 3 other female lions plus one male lion rushed to look over the edge to find out what had happened. At first, the lions tried to climb down the cliff but soon realized that it was too sharp and unsafe to climb down to the cub.

But as her baby continued to cry out in terror for her it was the mother lion who began once again to try to reach her cub. Slowly and very agonizingly she used her powerful claws to grip the crumbling side of the cliff as she inched her way down. One slip on her part and both she and her baby could finish up at the bottom of the cliff. 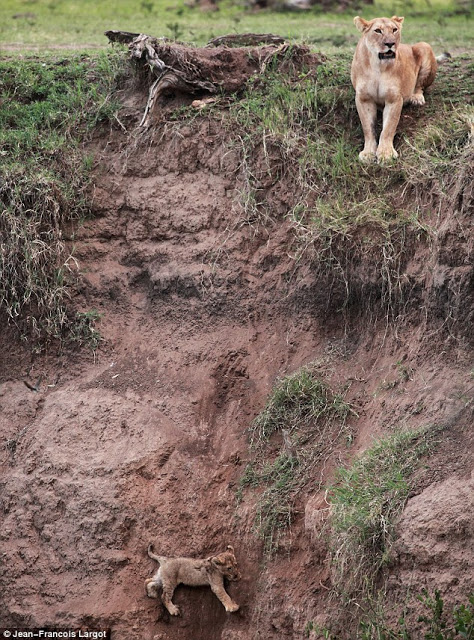 Right as her exhausted baby seems to be about to fall, the mother reaches him and grabs the baby cub up in her powerful jaws. Then she begins the risky climb back to the top.

During what seemed like hours but was only minutes, the mother lion reaches the top with her baby safely in her grip. She then softly puts him down and gives him a big motherly lick across the top of his head.

All ends well due to the power of motherly love that drove the female lion to risk her life to save her baby. As any mother will tell you it is the most powerful force in the world. Let’s hope the little one learned his lesson!