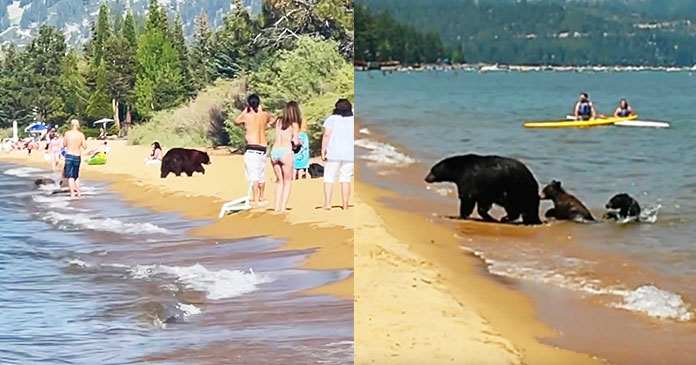 Animals too feel the hot and cold weather like us. They also try for options to help them beat the blues of the weather.  Like this mama bear who along with her 3 cubs decided to visit Tahoe Lake. Tahoe Lake is a hot place for people during the summer season to cool off. Everybody tries to get a dip in the water of the lake.

But one Sunday, the visitors got an unexpected surprise. They were joined by a mother bear and her cubs. It was really crazy as even the swimmers could not believe their eyes. But as the bears have a thick furry coat so it was natural that they too want to get rid of the hot weather. 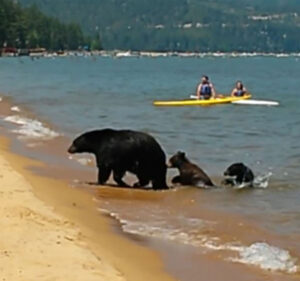 The family of the bears has taken a day off to be at the beach and enjoy themselves. They were seen many times during that day on the beach. Jen Watkins one of the beachgoers was first to see the bear and she even captured it on the camera. The bear was not even bothered by the presence of a large number of people.

The bear had a small problem with the golden retriever as he was a little bit protective of the cubs. It is very common to see black bears on the beaches of Lake Tahoe. California is having a large population of black bears around 25,000 to 35,000.

Though the bear family was very peaceful and they went away as they got tired of swimming, the wildlife officials warn people that they should be very vigilant when around wild animals. 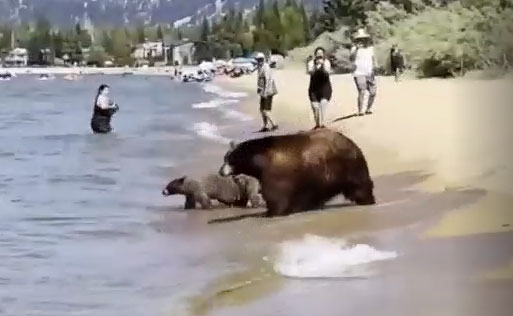 At times they can be very dangerous. Lieutenant Nelson Resendes asked people not to feed them, entice them, provoke them or approach them. It was a delight to watch the family of bears walking casually on the beach. We should respect them and their space.