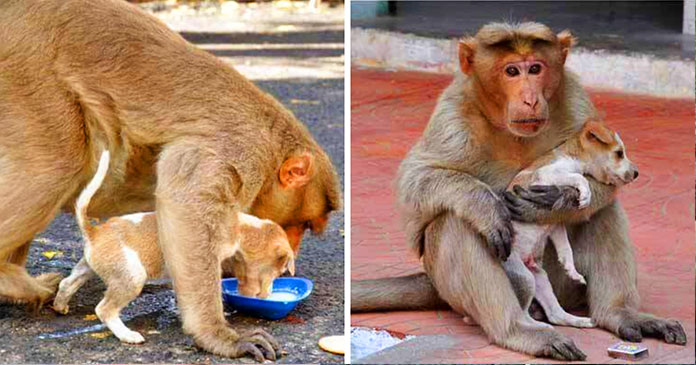 Animals love their babies that we know. They can go to any extent to protect their offsprings, that’s natural for them. But the question is, do they love the babies of another animal, belonging to different species.

That’s something we have to think about. It’s not natural for them to love and care for babies of different species. There are chances that they may like them but not up to the extent they like their own offspring.

One such instance happened in Rode, India where a monkey adopted an adorable puppy. It was quite unimaginable. The macaque monkey saw a puppy in a street and immediately adopted it.

The monkey becomes a parent of the puppy. It was trying to protect the puppy from other stray dogs. The monkey even fed the puppy allowing it to eat first. The two become inseparable. The local people were very delighted to see this great scene.

Their affection for each other was almost like a mother and child. People were so much impressed by their love that they started leaving food for them. The monkey allowed the puppy to eat first.

Their affection shows the amount of love that animals can share. We could really learn some lessons from them.