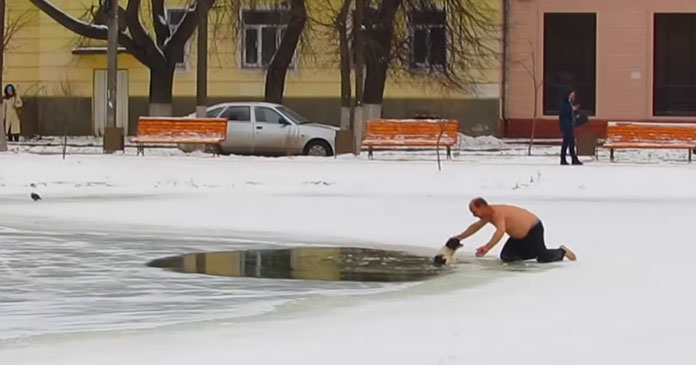 Kindness is the best thing that we can do to help someone in need. It is not only shown to humans but also to animals. We can be kind to the animals by being compassionate towards them, offering them food and shelter. Sometimes we can also save their life if there is a danger to their life.

It gives a very good feeling when we hear stories of kind-hearted men who are ready to risk their lives in order to save the life of an animal. Read this story of a courageous rescue mission. A stray dog was running after ducks on the frozen pond.

Unfortunately, some thin ice broke away and the dog fell straight into the frozen pond. Luckily a Russian man who saw the helpless dog suffering did not think for a moment and ran towards the panicking dog and was able to rescue it.

The man was only wearing his pants. He was not wearing any shirt or shoes. He knelt down and very slowly he approached the dog. But the dog was very much scared and he did not know that the man was there to help him. The dog barked at the man when he tried to stretch his arm towards the animal.

The dog even bit the man’s hand. But the brave man continued to do his effort. He knew that time was really very less and with the injured hand he continued to approach the dog.

At last, he was able to grab the dog by its neck and pulled it out of the pond. The dog was saved. The man was provided help for his injured hand. The local authorities thanked the man for his brave act and send the dog to a safe place.

This how the brave and selfless act of the man saved the life of a dog.  We need more people like him who could do this kind of act.watch video