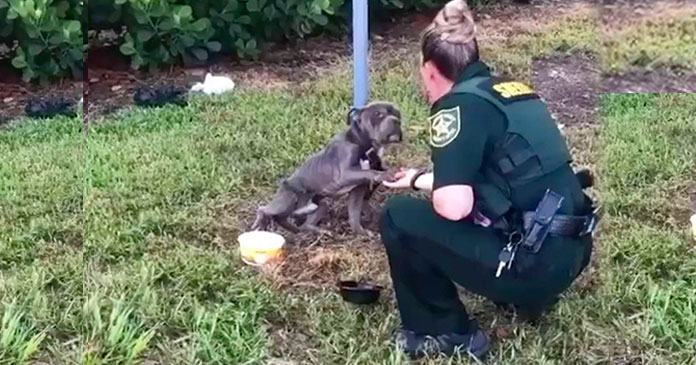 It is really shocking to know how cruel some owners are to their dogs. We have seen many cases of people leaving their dogs by tying them up in the middle of nowhere. They are not worried about what would happen to them.

But thankfully, as there are devils, there are also angels in the form of kind people who are willing to step up and help these animals. Their kindness actually brings great difference to their life.

A similar thing happened recently when a dog tied to the pole was helped by an officer. The incident went like this – Officer Angela Laurella of the Broward Sheriff’s Office responded to a call about a severely malnourished dog that was left tied to a pole. 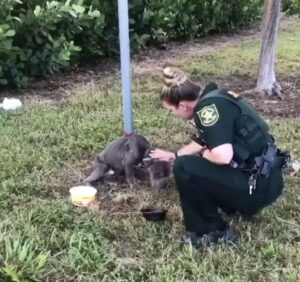 It was not clear who left the dog there or how long he was there. But the dog was severely malnourished. According to Amy Roman of 100+ Abandoned Dogs of Everglades Florida, the dog was very thin. His every bone and rib was protruding. His eyes were sunken as he was very malnourished.

When the officer arrived there, the dog was desperate for help and reached out his paw to her as he was saying to the officer- Please help me get out of here.

The dog was not having any microchip so that his owner could be identified and he was tied with a very short leash which restricted his movement.

Soon the dog identified that he was in better hands when the dog started feeding him gently. The dog was taken in by a rescue group named 100+ Abandoned dogs of Everglades Florida. He was named Liam.

They promised to give all the love and care that the dog deserved. They wrote that the poor baby was so emaciated, so thirsty, so exhausted and so sweet. It was hard to believe what he had gone through.

Thankfully, now Liam is on the road to recovery and he is getting all the help that he wanted. He is also receiving medical treatments from vets. We are happy that Liam is safe. Thank you everyone for saving him.