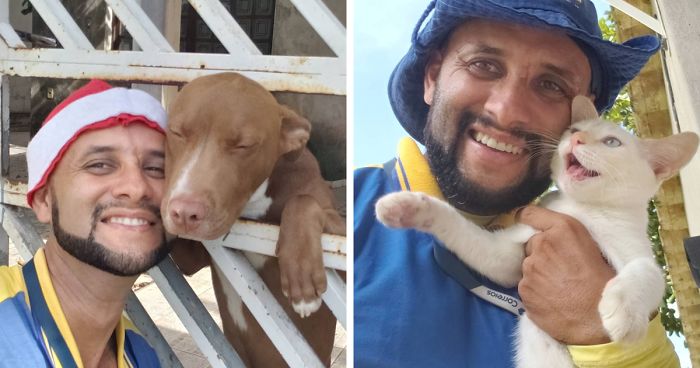 We know that Dogs are not usually fans of mailmen. Dogs hate mailmen. A couple of dogs chasing mailmen is a common sight. But not of them is at fault as the mailmen are doing their duty and the dogs are trying to protect their house. Due to this kind of relationship, mailmen receive special training on how to deal with these four-legged opponents.

But there are some people who want to bring about change and for whom stereotypes did not work. One such man is Angelo Cristiano Da Silva Antunes who is called by the name ‘Carteiro Amigo Dos Animais’ which means ‘Animal-friendly postman’. 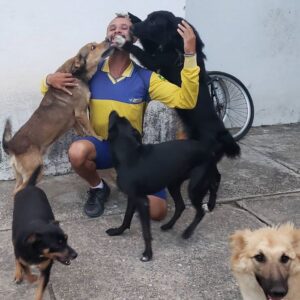 He has broken the stereotype of Postman- Animal Hatred. While on his work, Antunes takes time to stop and greet them. He befriends every animal he meets and takes pictures with them.

As animal lovers know, it is not easy to befriend a dog or a cat. Antunes knows this perfectly and goes through the entire process. He starts by saying hello and wins the trust of the animal. Then he allows them to sniff his hand from a distance and at last, he gets closer and lets them lick him. 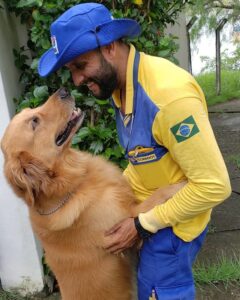 It is not like, he just likes to meet the animals at work. He even rescues some animals which needed emergency veterinarian attention. He takes homeless animals to shelters and helps them. He even wishes to open an animal shelter someday.

The mailman himself is a proud parent of a couple of dogs and three cats with his wife. Since childhood, he has been surrounded by dogs which tells why he loves the animals this much. 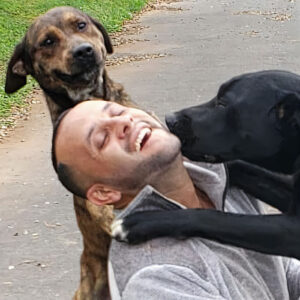 Antunes shares his photos online and each photo exhibits the love and the bond which he shares with those animals. In the photos, the animals are seen licking his face and giving him cuddles. Really we are impressed with this mailman and we appreciate what he is doing.