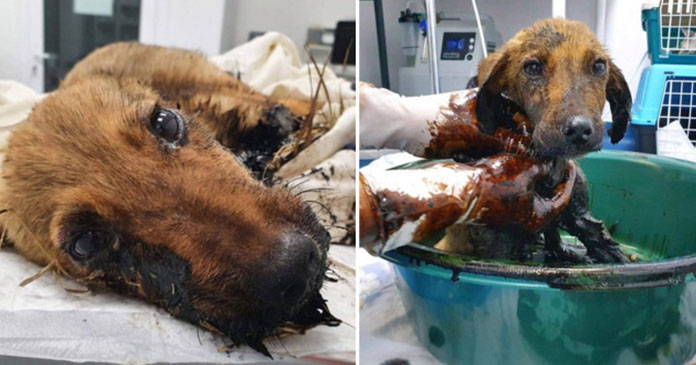 A tiny puppy suffered serious injuries when someone deliberately covered it with hot tar in Romania. Due to the hot tar, the pup experienced great pain, the tar got stuck to the dog’s fur and skin making it unable to move. Not only this but also toxic fumes of the tar which the pup breathed in has extremely damaged his lungs.

Disturbing pictures show the dog covered in a black substance that seemed to have been taken from a nearby building site.

The little baby is now rescued and is looked after by Mayflower Animal Sanctuary in Doncaster. According to the vets, the puppy which is a mixed breed was stray as it was extremely thin due to malnutrition.

The pup needs to be bathed with special lubricants in order to remove the tar which had already damaged its skin. The puppy is even treated for pneumonia. In order to bear all these expenses, a fundraiser has been launched. This fundraiser will even help to transfer the puppy from Romania to the UK.

A Mayflower spokesman told that boiling tar had been deliberately thrown at the puppy which seemed to be taken from the nearby building site. It is hard to believe how people could be so cruel at times. This innocent suffered for no fault of his.