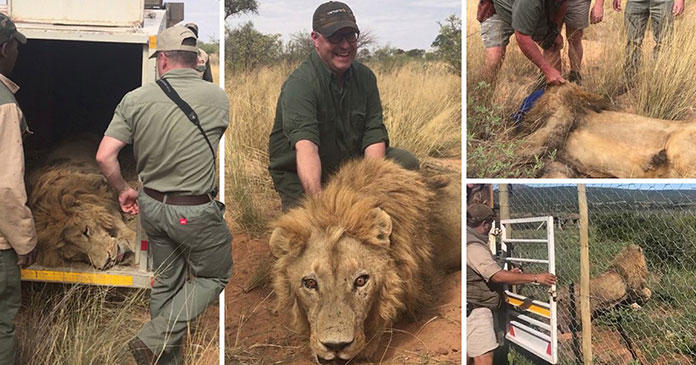 According to the shocking revelation made by a book and film by the British businessman and philanthropist Lord Michael Ashcroft, around 12,000 lions are being farmed in captivity only to be shot dead by the tourists. It has thrown light on the hateful practices that are carried out by the hunting industry in South Africa.

The name of the book is ‘Unfair Game: An Expose of South Africa’s Captive – Bred Lion Industry’ and it points out the evils of captive – lion breeding and so-called ‘canned hunts’ exposing how the number of lions in captivity is four times greater than in the wild.

In one part of the book, Ashcroft wrote that the abuse of lions in South Africa had become an industry. According to him thousands of lions are bred every year on farms.

When they are still young, they are separated from their family. These young cubs are used as pawns in the tourist sector and then killed in a hunt or they are slaughtered for their body parts or bones which have a huge market in Asia’s medicine market.

This is not the only thing, they are not fed properly and they are kept in cramped and unhygienic conditions. They are even beaten if they do not perform well for the customers.

Ashcroft feels that only a few people benefitted from this set – up. He feels that as  South Africa’s constitution and laws are not very strict, they are able to do it.

In order to bring out the truth,  Ashcroft had done two undercover operations in two years which are known as Operation Simba and Operation Chastise.

During these operations, the team found evidence that captive-bred lions are used for sport hunting. One of the videos shows how a lioness was shot nine times.

His new book tells about the price of hunting the lion. An adult lion with an impressive mane can cost up to $50,500 to trophy hunters. Ashcroft feels that lion farming is a shame for the country and it is a time to realize that it is a cruel and barbaric industry.

Thank you Ashcroft for your efforts to expose the plight of the lions. It is high time that trophy hunting should be banned.