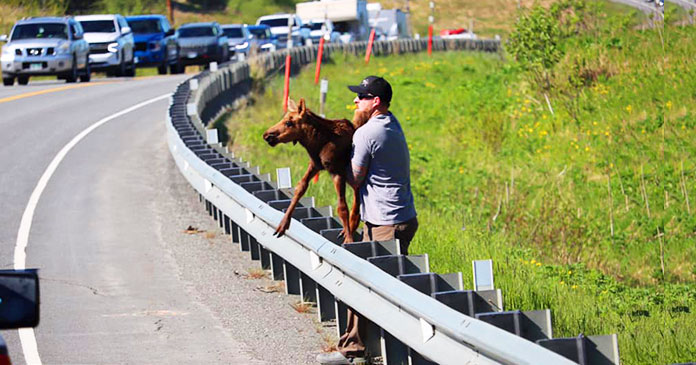 Animals follow the same route for centuries. Due to the advancement of technology, we invaded their territories, blocking their old paths and ways. Though we do our best to coexist with wildlife still some times our roads and structures create problems with the free movement of the animals.

In order to cross these manmade structures and roads, they need some human help. The same thing happened recently when a man was seen lifting a baby moose to help it cross the guardrail. 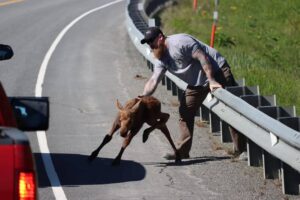 This incident happened in Anchorage, Alaska. It goes like this, a mother moose was going across a highway with her calf, but the guardrail was too high for the young moose to cross. The mother crossed the highway but the calf was stuck and it was very nervous as it moved back and forth.

But there are always people who are ready to help the animals in need. A man got out of his vehicle to help the young moose. The man named Joe Tata decided that the best way to help would lift the calf above the guardrail so that it could join its mother. 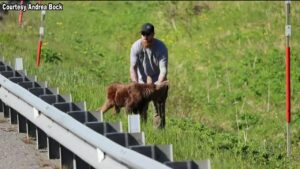 According to Tate, the baby was very tired and it was only a week and a half old. At first, he thought of calling the wildlife services but was worried that one of the moose would be hit by the car before they arrived.

But moose could be dangerous animals as mother moose might have charged him. Tate, a military veteran had experience with the wildlife and he made a calculated risk in helping the calf. 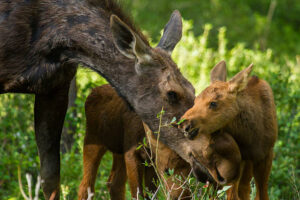 Fortunately, everything went right, he got the moose over the rail and it was reunited with its mother. Thank you good Samaritan for helping out a baby moose to reunite with its mother.