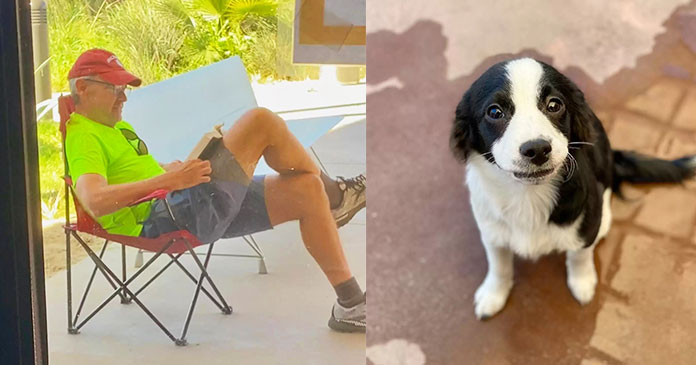 Sometimes some people go above and beyond only to win the love of their dog. They do this only to get accepted by the animal as the animal becomes their favorite.

So when Dr. Brian Eberhart met a puppy named Elliot, it was love at first sight and he knew that he knew that he was ready to do anything only to get accepted by the dog.

The puppy, Elliot, which is a border collie came to Palm Springs Animal Shelter in early March. He was stray so he was shy and afraid of most people.

But there was pain and sadness in his eyes which melted many hearts. After that, Elliot was sent to a foster home so that he can adjust and there he met Dr. Eberhart who is a retired orthodontist.

According to Anthony Mercurio, marketing and communications manager for Palm Springs Animal Shelter, Dr. Eberhart’s neighbor was Elliot’s foster guardian, so he had already met Elliot while he was in foster and had the opportunity to get to know and fall in love with him.

After spending some time in the foster, the dog became available for shelter and Dr. Eberhart made sure that he was first in line at the shelter to adopt him. He was so much fond of Elliot that he reached before the shelter staff and sat there in a folding chair, reading a book by the front door.

According to Mercurio, they noticed Dr. Eberhart camped out in front of the shelter and they found out that he was there to adopt Elliot. He further added that other people came by that morning as well but once they found out that they did not open until 1 pm that day, they left.

Dr. Eberhart remain there and when it was the time to meet Elliot, the small dog was filled with excitement. Mercurio said that it was a happy and playful meet and greet from the start. The dog acted like he was being reunited with an old friend and it was obvious that there was a match there.

Elliot was adopted by Dr. Eberhart and he renamed him Leo- an acronym for ‘Love Each Other. The dog is very much close to his mom and dad. The way they found each other, it seems they would have the happiest life together.