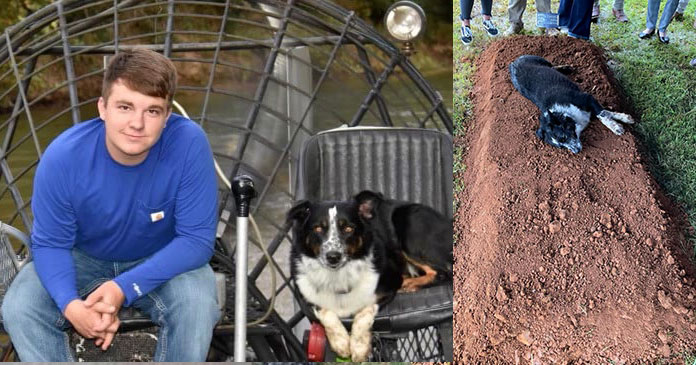 Our pets are so much attached to us. They have emotional intelligence. They are able to make out when their owners have passed away and they even miss them and mourn their death.The same happened to one dog which lost its owner and he bid a heartbreaking farewell to him at his funeral.

The name of his owner was James William ‘Will’ Warner. He was only 22 years old and lived in Shelbyville, Tennessee. It was reported that he was shot to death and left in the street by his killer.

Though his girlfriend was also shot, she survived the critical wounds. Will’s death left their family in great shock and they were devastated by it. His mother just collapsed and it appeared like her whole world was broken into pieces. 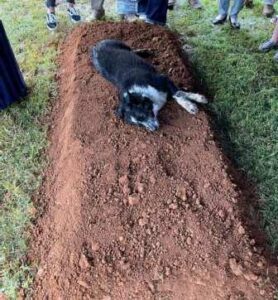 According to his mother, he was larger than life and he was a good boy.  Metropolitan Nashville Police Department identified a suspect in the murder named Samuel Earl Rich who is 25 years old.

Unfortunately, due to the state Will’s body was found in, they had to bury it immediately. According to his mother, she didn’t even get to pick the casket out. They were not able to say a proper final goodbye to Will.

He was buried at Mt. Lebanon Cemetery.  His friends and family gathered at his graveside to bid him final goodbye and to mourn and remember him.

The most heartbreaking picture was of Will’s dog, Ace who laid down on the fresh burial plot in order to be closer to his dead owner.

Ace was described as a ‘faithful friend and loyal companion’ in Will’s obituary. The two were very close to each other and it showed that the dog would not be able to forget his departed best friend.

Rest in peace, Will. You were loved and missed by many. Your dog will surely miss you in his life.