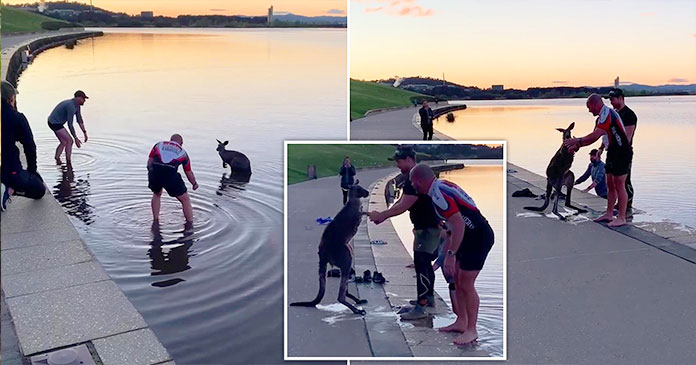 People who are helping animals are really great. It is a thankless job as animals don’t know how to show appreciation for a good deed.

But at times animals also show gratitude towards the kindness done to them. They have their sweet way of thanking their rescuers like one kangaroo who offered a handshake to the men who saved him.

According to Daily Mail Australia, a man named David Boyd spotted a kangaroo in Lake Burley Griffin in Canberra. The water was freezing cold and the animal was unable to get out. It was shivering in the cold. 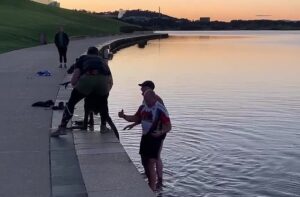 The two brave bystanders came forward to help the animal. They were very cautious not to frighten the kangaroo. Once they went close to the kangaroo, they try to grab its arm to lead it to safety, the kangaroo started moving his arms.

But the men were not afraid and they got hold of the animal and lead it out of the water. The third man helped in lifting the animal and took it to the dry land. The animal was calmed as it was shivering and scared.

Though kangaroos seem gentle, they can be dangerous if they feel threatened. In order to defend themselves, they can punch and kick very strongly. 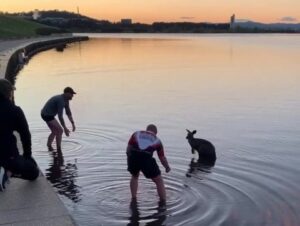 But this kangaroo understood that those men came to help him and he thanked the men by holding out his paw as if to offer a handshake.

The man who was filming the video added that the kangaroo was thanking. After that, the kangaroo hopped along on its way as it was unharmed by the ordeal. Thank you these brave men for saving this kangaroo.