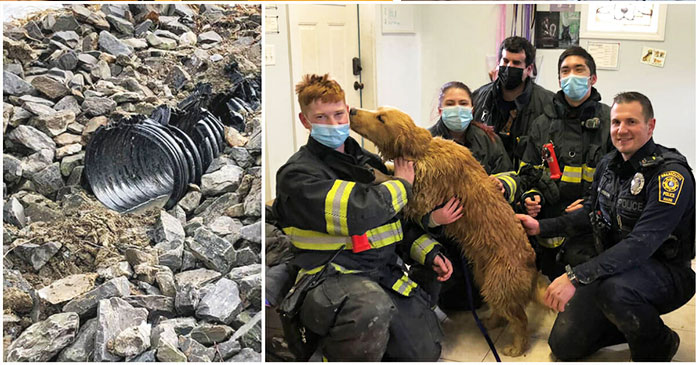 One can rely on firefighters for help if pets are in danger. They did everything possible for the safety of your dog.
A similar case happened recently when a poor dog got trapped in a drain pipe and it was rescued by crew. The name of the dog was Fable which is a golden retriever from Falmouth, Maine.

The dog was trapped inside a drainage pipe. According to her owner, the dog took an unwise shortcut through the plastic culvert but got stuck as it was frozen shut on the other side.

So the firefighters from the Falmouth Fire-EMS were informed. They arrived along with Falmouth Police officers on the scene to rescue the dog from the icy pipe. 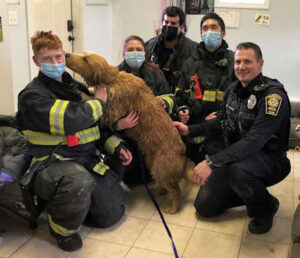 According to Kelly Mayo, firefighter and paramedic, Fable was calm and cooperative the whole time. Fortunately, the crew was able to free the dog. Fable was affected by the ordeal. Once the dog was free, she was happy playing and running around. She was very thankful to the crew.

In the photo shared by the department, the golden retriever was seen kissing one of the firefighters. The firefighters did their work very well and Falmouth Fire-EMS praised all the responders for their inspiring teamwork in their post. 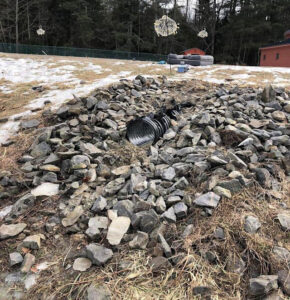 The post read – Kudos to the crew from Engine 4 along with Falmouth Police for working to free the young Golden Retriever from a drainage pipe. It is really good to hear that the dog was safe. All thanks to the firefighters.