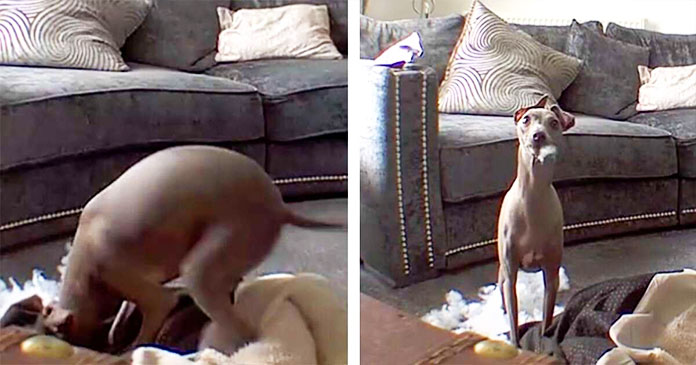 An apology can do wonders when one is caught doing something wrong. Moreover, we should be remorseful of what we have done. Either one can stay in one place, run to the sofa and behave as if nothing has happened.

Animals especially dogs react in the same way. When they are caught red-handed, the reaction which they give is quite cute and amazing. Here is a dog named Arlo who was when caught by his dad, the reaction was too cute to be ignored.

Usually, Arlow who is an Italian Greyhound did not behave very aggressively and is not fond of destroying things, but sometimes he too likes to dig in his bed. That was what he was doing when his dad Garry Mill, caught him.

Mill has installed a mini camera in his house in order to check on Arlo and at that time he was out of the house so he decided to see what Arlo was doing.

So far milk has not used the microphone features of the cameras because he feels that it would upset and confuse Arlo with its strange voice. But on that day as Arlo was stuffing up his mouth, Mill thought that he would eat up the bed stuffing and he decided to use the microphone.

Mill said that when he spoke to him he froze and then he never went back to the bed. He further added that he didn’t realize how funny the clip was and when he returned back and watched it he found it very funny.

The dog’s charm and his cute face ensured that he won’t get any scolding from his parents.

The dog was adopted by the mill and his fiancee, Chelsea Watson during Covid lockdowns. As they always had dogs in Carnoustie, Scotland so they wanted a new one for themselves and found a perfect fit.

According to Mill, Arlo is very good and he loves to be cuddled and wanted to be in his arms like a baby. He is very playful and wants to be in the bed with them.

He has helped Mill in many ways even in proposing to Watson when he wore a tuxedo for the occasion.

Arlo is a very special place in the couple’s life. According to Mill, he has changed their life in many ways and he makes them feel complete happiness when they come back home after a long day at work.

Next time, Arlo would surely apologize, if he ever tried to play with the bed.