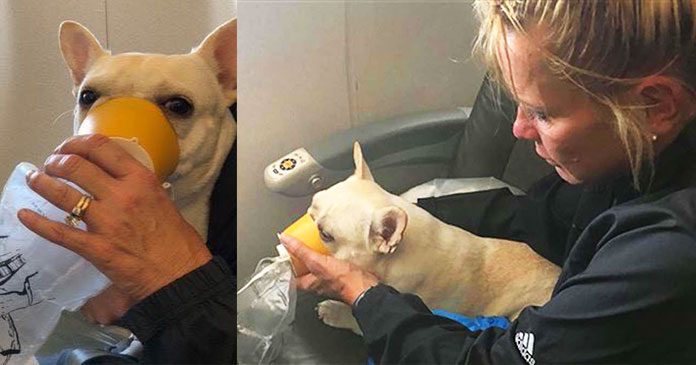 Sometimes breaking rules is great to save someone’s life and we feel proud of what we have done. Here in this story, some flight attendants broke the protocol to save a little dog’s life and they were very happy to do that. The travelers Michele and Steven Burt brought their three dogs onboard their JetBlue flight in carriers.

They were flying from Florida to Massachusetts. They kept all of them under their seats and soon found that their small French Bulldog was having very difficulty in breathing. 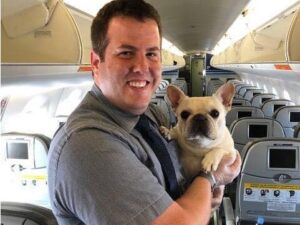 As they were on the flight, Michele found that her French Bulldog “Darcy” was trying to push her face out of the door. Then she unzipped the door and found that Darcy was not well, there was something wrong.

She said that her dog’s tongue was blue which indicated that there was insufficient oxygen. So she pulled her out from under the seat and placed her on her lap to cool down and help her to relax as she was panicking and breathing hard.

The flight attendant noticed that the dog was out which was strictly against the rules and Michele was aware of it. She knew that her dog was in serious danger if she put her bag back in the carrier.

Michele knew that she was breaking the rules and decided to tell the flight attendant that Darcy was very sick. The flight attendant alerted other crew members and all of them sprang into action to help the dog. Flight attendants Renaud Spencer and Diane Asher took some ice bags to help Darcy cool down but in vain. 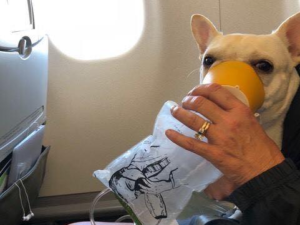 Then Renaud who also had a French Bulldog brought a small oxygen tank with a mask and put it over Darcy’s face and she was finally able to breathe. She was able to calm down and became more alert.

Though the flight attendants broke the protocol yet they won everyone’s heart. Even JetBlue praised them for their actions. They said that their mission was to inspire humanity.

Michele gave full credit to Renaud and Diane for saving Darcy’s life. Thank you to all the flight attendants who went out of their way to help save the dog.