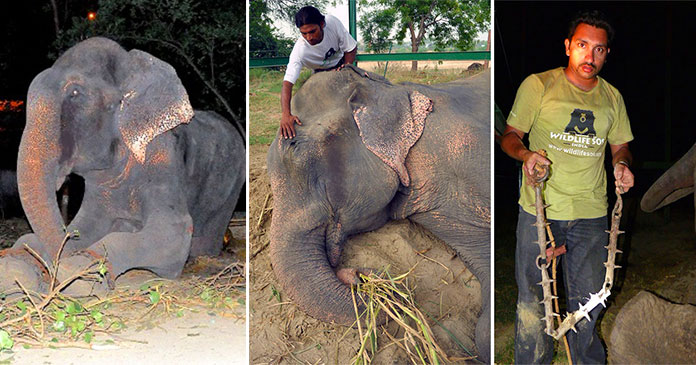 We should have love and compassion for all the creatures of the world. It is very hard to believe that some people do not find any wrong with the idea of abuse, neglect, and abandonment happening to the animals.

Some people are so inhuman that they are bent on making the life of certain animals a living hell. Raju the elephant had a hellish life for 50 years.

He was shackled in spiked chains and he survived on the little bit of food given to him by the tourists. These years he led a very miserable life. To add to the misery was the abuse he suffered at the hands of his captors.

At last, his dreadful life came to an end when the beautiful creature was finally rescued in a mission. Wildlife SOS, a group which was made in India with the aim to protect and rescue the wildlife took up this matter of saving Raju from his torment. 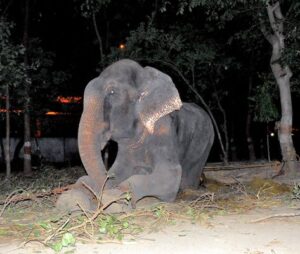 At the time of the rescue, the elephant was 50 years old. He was captured as a baby and after that, he was bought and sold like a commodity to be used for the entertainment of tourists.

At last, he ended up as a begging elephant in Allahabad, India. He was shackled in spiked chains which not only hindered his movement but also made the elephant suffer wounds. His life was made living hell by his captors who abused him though they were earning huge profits from him.

Raju’s story was very touching and Wildlife SOS decided to act immediately after hearing his story from India’s Forestry Commission. Though Raju’s captors tried every effort to fail the rescue like layering with tighter chains and even shouting commands to confuse the elephant their efforts were in vain

finally, Raju was rescued by a team of 10 veterinarians and experts from Wildlife SOS. They were helped by 20 Forestry Commission officers and two policemen.

After the rescue, the team said that the elephant had tears rolling down from his eyes. Raju was quite emotional as he knew he was finally freed.

Then he was taken to Elephant Conservation and Care Center in Mathura where he would undergo a healing process that would be the beginning of his new and caring life. Now the final years of his life will be filled with love. Thank you to all the people who were involved in the rescue of Raju.