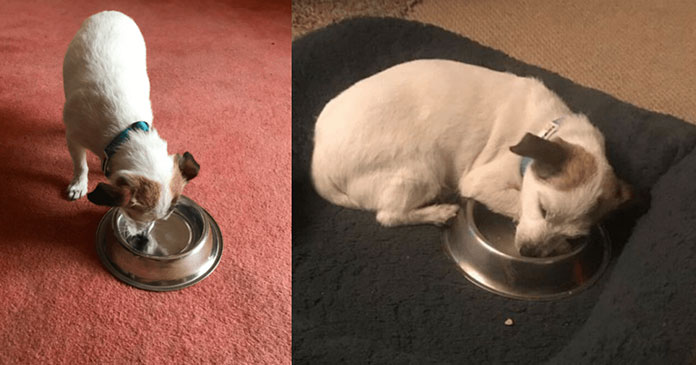 Stray dogs have to live a very hard life. But they are very kind. Occasionally when approached by strangers they may behave aggressively but it is their effort to hide their fear. The reason being they are lonely all their life and they don’t know how to respond to a human being.

Adopting a street dog can really change his whole life. The best thing about the rescue is that they expect nothing. So the slightest thing can change their whole world. These animals only wanted to be loved and they are waiting for the right person to take them home.

Here the right person is Sussanne who adopted a 10-year-old Jack Russell terrier mix named Nivelle. She came across the photo of this dog as she was checking her local rescue website. Though she already had rescue dogs at home yet on seeing Nivelle, she decided to have him.

Neville was found wandering in the street like a stray dog. He was in very poor physical condition. It appeared like the dog had a traumatized past. He was severely unneutered and had rotting teeth. There is also likely hood that it is used for breeding. So it was clear that he had been treated badly in his past life.

According to Susanne in the beginning, Neville used to compete for food and tried to feed directly from the floor or from any other dog’s bowl. Considering this odd behaviour, Susanne decided to teach him to eat from the bowl.

But things changed when Neville realised, he didn’t have to compete for food. Now he knew that the bowl is his so he never leaves his bowl. He even prefers to sleep with his bowl at night. Even after two years, he is very fond of the bowl. He feels that the bowl is the guarantee of nutritious food.

Rescue animals cherish the little things so it’s very important to adopt instead of shop.