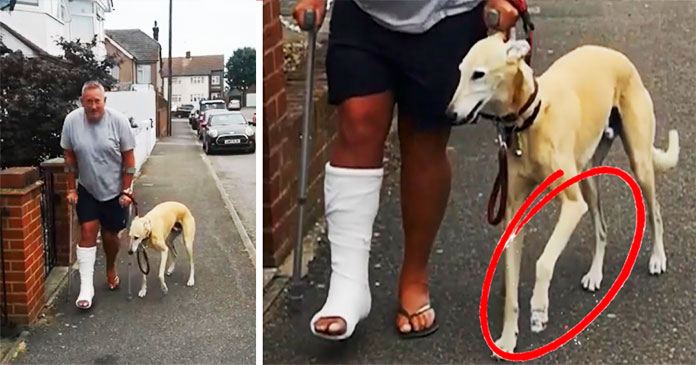 It can certainly give us sleepless nights, knowing that our dog is sick or injured. We always want them to be in the best of their health. If we find them not well, we would like to take them to the vet as soon as possible.

Here is an interesting incident where one man was really worried about his dog but it turns out that the dog was more concerned about the man.

It was discovered that the injury which the man thought the dog was having, was not actually an injury but it was the dog’s way of showing his sympathy towards the man.

The incident is like this, the man named Russel Jones from London broke his ankle last year and he had to wear a cast and walk with help of crutches.  But after this something strange happened, his 8-year-old dog named Billy, suddenly started limping.

Russel was really surprised as well as concerned that what happened to his dog’s foot. So he took his dog to the vet the next day. His trip to the vet cost him over $ 400 and it involved scans and x-rays and after all these tests, everything seemed ok. 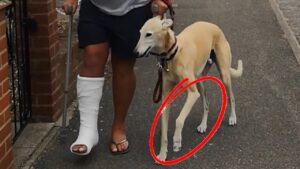 Russel said that the dog walked in normally and came out and they said that there was nothing wrong with the dog. But the strange thing is that the dog started limping again when they went back home. Then his wife saw the dog running in the garden at full speed when Russel was not at home.

Then they made out that the limp was not real. Actually, the dog was faking a limp around Russel in order to show his solidarity to him as he was on crutches.

How thoughtful and caring the dog could be, is shown by Billy. When his owner was unable to move normally, the dog started limping in order to show his sympathy. Really it is a heartwarming gesture from the dog’s side.