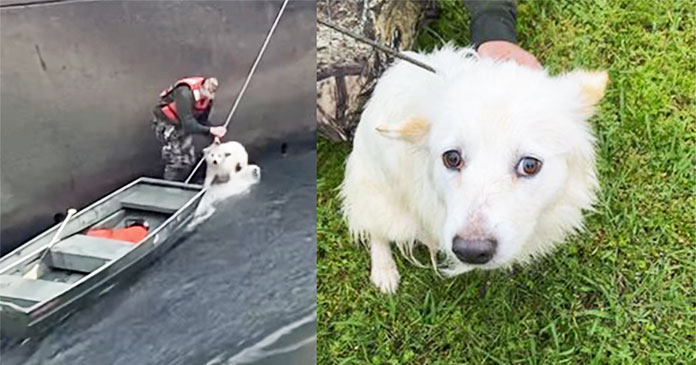 It really breaks heart to see that some people are really heartless and they can do anything to hurt the animals. But there are some people who are very kind and they can go to any extend to save the animal. One dog which was abandoned by the owners, got trapped in a dam.

The dog was helped by some firefighters who came to his rescue and thankfully the dog has a new family now.
The dog was found in the Lake Wister Dam in LeFlore County, as he was standing on a concrete flat which was surrounded by rushing water and he was in danger of being swept up by the current.

Madison Renee one of the onlookers said that when they got there, there was no way to get down to save the dog. They all stood around and watched her trying to adjust in the current. It even seemed that the dog was thrown there as there was no other way by which the dog would have landed there.

Thankfully soon the help came, members of the Wister Fire Department came to rescue the dog. The dam was temporarily shut and they came in the boat and were able to reach the dog with a rope. According to Aaron Capell, volunteer firefighter, the dog was scared when they came but soon warmed up to them and he even talked to her and patted her.

The dog was named Grace and was taken by Poteau Valley Humane Society. Luckily, after the rescue when her story went viral, she got a new house. James and Paula Watson from Charleston, Arkansas, saw the story on TV and decided to adopt Grace.

When they visited Poteau Valley Humane Society, they fell in love with her and adopted her for good. They said that there is a look that one gets when that’s the right dog and Grace has that look. We are so happy that Grace found a good and loving home. 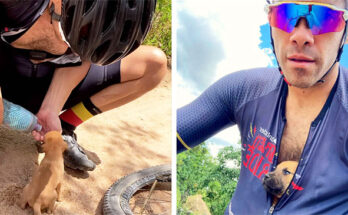 Cyclists find five puppies buried in hole, rescue them by carrying them to safety in their shirts