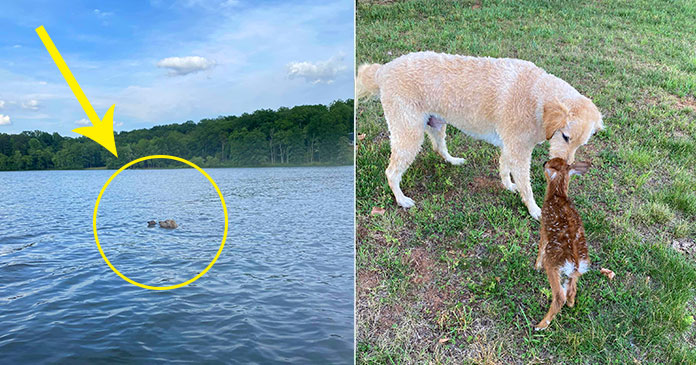 Dogs are very loyal and dedicated. They turn out to be real heroes as they have great ability to sense when someone is in danger and they often come out to the rescue whether it is a human being or animal.

The same thing is done by one dog when it jumps into action to save a baby deer that was in the middle of a lake. Harley a Golden doodle lives with his parent Ralph Dorn, a retired Marine Corps pilot from Virginia. One day they were outside at the lake near their home and suddenly Ralph found that his dog is missing and he was unable to find his dog. 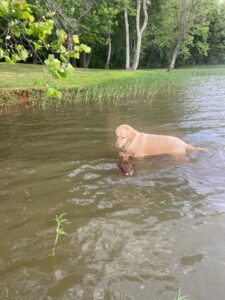 After some time, he found his dog in the waters of the lake which was paddling himself out to the middle of the lake. At first, Ralph was confused thinking about what his dog was doing in the lake but looking closer, Ralph realized why his dog was in the water.

Both the dog and the fawn reached the shore safely. Then the mother deer came back to take the fawn. Back on the land also, Harley kept protecting the baby deer, interacting with it and caring for it. 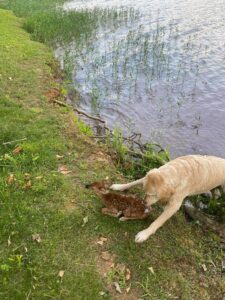 It seemed that both of them have become close friends as the next morning fawn again came to see Harley as he wanted to thank him. They had a brief reunion and then the fawn walked away with its mother.

Ralph had shared this touching account of his dog on Facebook and it has been shared over 253,000 times. Ralph says that Harley is a therapy dog who has worked with the elderly and children.

Really Harley is such a great dog. Thank you, Harley, for saving the baby deer.