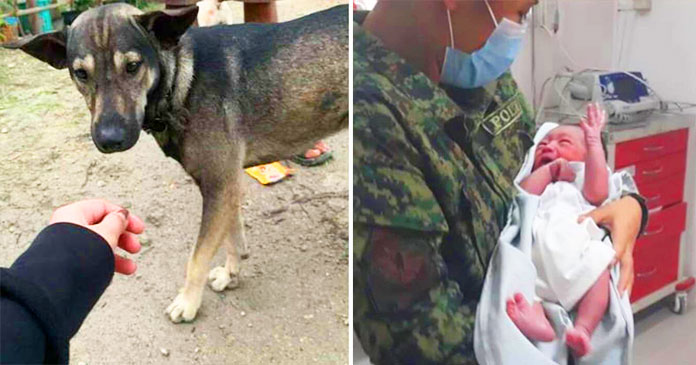 Dogs are very helpful to their parents that we know. But sometimes they can even provide help to the strangers and this tells about their caring nature.

Here is the story of a dog who helped an abandoned baby. The incident is like this – Junrell Fuentes Revilla was going on his bike through the mountains near Cebu in the Philippines.

As he was riding a dog started running after him. The dog barked and barked as he wanted to have his attention. The biker felt that the dog was trying to say something to him, so he stopped the bike.

The dog led him into a dumpsite where a little bundle was lying on the ground. Revilla was very surprised as he found a baby wrapped in a towel.

The place where the baby was found was isolated as it was located at the top of the mountain. He took the baby and immediately took it to a local police station. The baby was in good health only due to the quick thinking of the dog.

This story of the dog soon became viral and the dog was hailed as a hero. Soon the volunteers of the rescue Hope for Strays stepped in to help the dog.

They reached the spot in order to help the hero stray dog, but instead, they met a man who claimed that the dog named Blacky was his dog and it was not a stray dog. The man led the volunteers to his home and they saw Blacky with the other three dogs.

The volunteers were relieved to find that the dog was not a stray one. But still, the dog and his family needed help as his family was not that rich. Since then, Blacky and his family had started receiving support from the people like donations of food, pet supplies. With his kind act, Blacky had changed the life of his family. We salute Blacky for his brave act.