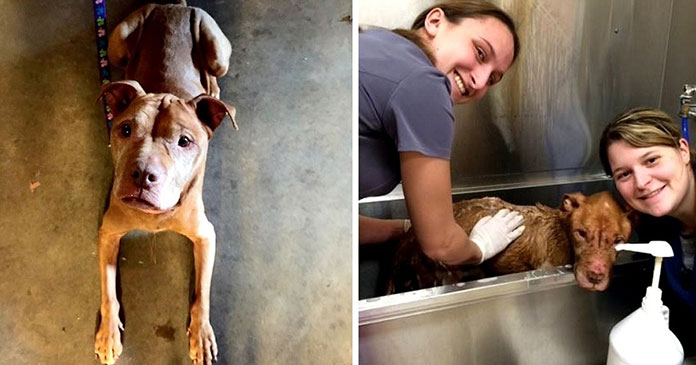 Everyone’s life is not the same. Some stories end sadly, but then also there are moments that can be cherished and those moments can actually brighten up our day. Here is the inspiring story of a dog who suffered a lot in her life but in the end, she got what she deserved.

The dog named Jada was very unfortunate who spent 9 years facing cruel and harsh treatment at the hands of her owners in the basement in Syracuse, New York. It was her good luck that a kind citizen informed her about the pitiable condition to the authorities and the Syracuse police quickly took the action and saved the poor Jada and her son Sonny.

Both of them looked horrible as they were skinny and covered in scars. At that place, it seemed they were not fed properly as there was no sign of food and water. The officers immediately rescued them and sent them to the Veterinary Medical Center of Central New York for proper medical attention. For this, the owners had to face charges of animal abuse.

According to the center, Jada was very weak, covered in scars and lumps but she loved everyone who took care of her. Despite what she suffered, she was a very kind dog. With her warmth and friendly nature, she was able to get many fans outside the center. They used to send gifts to her.

As everything was going well, something changed her life forever. After her stay at the VMC, she was referred to the Humane Association Of Central New York for further treatment. There she was diagnosed with cancer and she was only left with few months of life.

So now the plans to find someone to take care of her were dropped. HumaneCNY took charge of making the rest of her life very happy by giving her a final gift- a bucket list. This bucket list was filled with fun activities like learning a new trick, eating at the McDonald’s, riding in a fire truck and police car, to become a TV star.

One afternoon Jada passed away peacefully but at that time she was not alone. Though her story is sad she is not sad at all. She spreads happiness wherever she went and whomever she met.