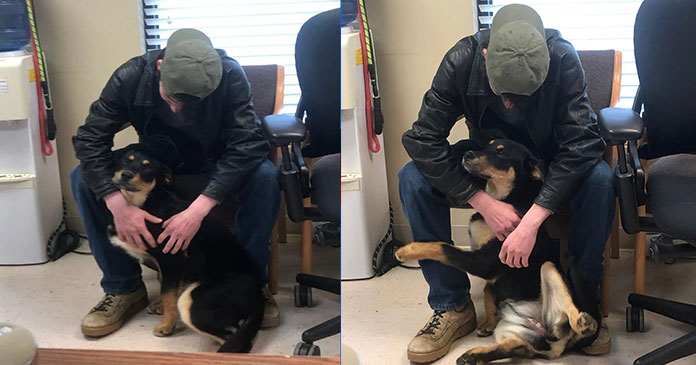 It really breaks heart when a dog is surrendered to a shelter. But at times one is passing through a difficult phase and is left with no other choice but to take the extreme step. One such incident happened where a teen boy fell on hard times and had to surrender his dog to the shelter.

But when people got to know about his situation, they were moved by his condition and decided to help the boy. They do help the boy which leads to a sweet reunion. The shelter where the boy surrendered his dog was the Senatobia- Tate County Animal Shelter, in Mississippi.

The shelter shared the sad news of how a 17-year-old teen who was homeless and was living under the bridge, was unable to take care of the dog and decided to surrender the dog to the shelter. When the shelter got to know about the reason behind it, they grew sympathetic toward the boy and decided to help the boy.

They were able to make out that the boy did that as he was left with no other choice. The teen and the dog, which is four-month-old shared a great bond. The dog named Jada loves his owner a lot. The teen himself took the dog to the shelter and made sure that she was taken in properly.

The teen when he left the dog, was heartbroken and even the dog was in pain and did not want him to go.
The shelter wrote the dog pinned herself to his legs while the boy was there. After the boy left, the devastated dog was seen lying on the floor. The shelter further wrote though they were full yet they took in the dog. The bond between the boy and dog moved the shelter. They decided to share the story of the boy and ask the people to help him.

The post went viral and many people were moved by the painful story. They went further and asked how they could help the teen so that he could be reunited with the dog. As the teen got public support, the shelter informed the teen about the help and if he were ready to accept the help.

So the Senatobia- Tate County Animal Shelter informed the people that they could help the teen and his dog either by helping to fund the dog’s treatments or by donating money or gift cards to the teen to help him back on his feet. People were very charitable and helped the boy and dog.

The latest update about the teen is that he got the place to stay and he will soon take his dog back. The support which they got will help them in the future and they will remain together always. We are grateful to everyone who helped the dog and the teen.