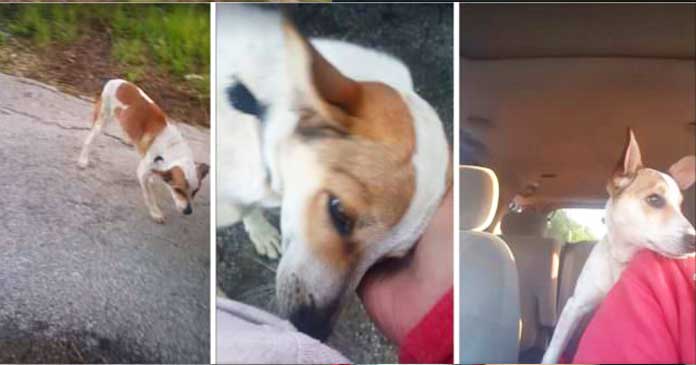 Dogs are left with no fault of theirs. They feel like they are not wanted anymore. Sometimes even after they are dumped they waited for their owners to return. Here is the story of Callie who was dumped and by luck, she was rescued by a kind lady.

Fort Worth’s Echo Lake Park, this place is quite infamous as it is the place where people abandon their animals every day. Many of the abandoned animals lose their life. But Callie was a lucky one as she was saved by a lady. The Abandoned Ones’ founder Judy Obregon is a lady with a mission.

Her mission is to save as many animals as she could. So she drives in that area very carefully hoping to find a life that she could save. So far the kind-hearted woman has saved hundreds of dogs in that area.

Callie is one of the fortunate dogs saved by this amazing woman. The 6-month old dog was tied to a fence and left there to suffer. However, the smart girl was able to chew up the rope but she preferred to remain there hoping that her owner would return to take her with her. But her owner never showed up.

But as we know if there are devils there are angels also. Judy turned out to be an angel in this case and Callie knew that her luck would change as she felt that the woman had come to help her.

She became happy and limped towards Judy as if to tell her to help and to tell her about her problems. After the rescue, Callie sat in the car with her rescuer and gave a final look at the place where she was abandoned. The sadness in her eyes was real.

Callie was taken to the vet and it was found that she was fine.  Callie was back to her normal self and she was again smiling. According to Judy, dogs are very forgiving and it could be seen in her eyes. The dog was later adopted by a wonderful man and we hope she has a bright future ahead.