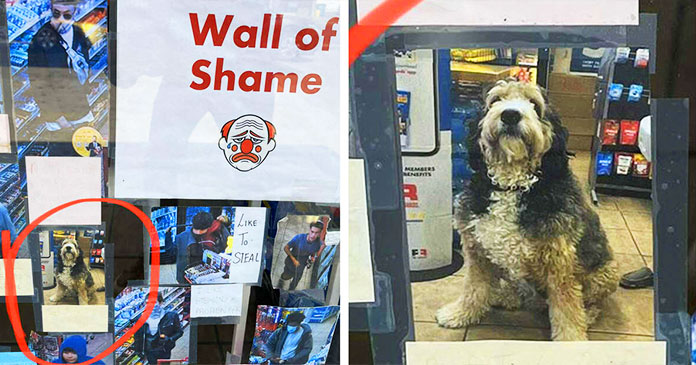 There is a convenience store in Denver and the owners there are fed up with shoplifters. So they decided to put up a ‘wall of shame’ which has photos of all the past offenders who were caught on the store’s security cameras.

But one of the offenders is quite different from the others. There is a photo of a dog- his face reveals his crime. But what was his offense?

Below the photo of the dog, there was written, ‘Beef Jerky Thief’. In spite of that, he was described as a ‘good boy.

In order to find out more about the dog, a person named Jakub Niedzwiecki was contacted who is a regular visitor to the convenience store. He talked to the owner to find out what actually happened.

Neidzwiecki said that the dog belonged to one of the regular customers and it has such a liking for the jerky aisle that it bit on a loose Slim Jim and went out of the store with it. The dog was caught before he could go away with the steal and he was just added to the wall of shame as a joke.

But still, the dog is allowed inside the store with his owner and he is so shameless and it looks like he is looking for another chance to rob. He even became friends with storekeepers.

The store owner said that every time the dog is there, his nose leads them to the same aisle.

It is really very cute and adorable to know about this dog.