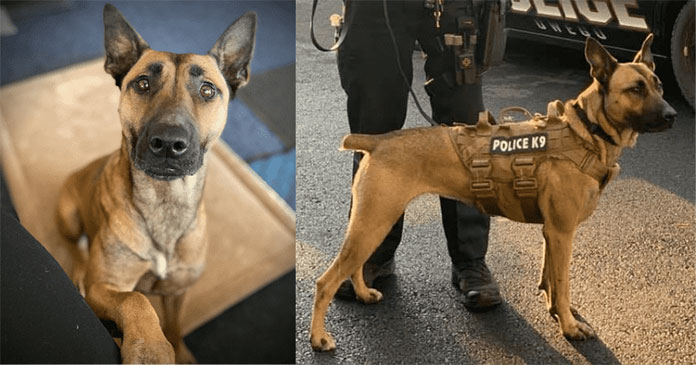 All of us believe in luck, which means the majority. But there is a thing in luck that it can be helped by skill. We can’t undermine the importance of skill in the success of a person. If we consider that only luck helps, we are taking away the natural ability of a person. We are not crediting the person for his hard work and for his innate quality.

Here we will narrate the story of Maggie. Maggie is a new addition to Owega Police Department. But the question is why we are discussing Maggie when there are a number of other K-9.

Maggie is special because she is not like other typical K-9. Her story is very different. In her life, we will see how luck has played an important role as well as her own quality.

It is believed that K-9 Mag is a three-year-old. She is a pitbull- malinois mix. She has seen many ups and downs in her life. It was a complete topsy turvy at one time.

Being a stray animal, Maggie was taken by the Town of Hempstead Animal Shelter in late 2018. There she was soon adopted by someone. But sadly the home she got didn’t last long for her. Her adopter left her at a paid kennel and never returned to take her back home. She was again returned to the same shelter house.

Once again lady luck smiled on her when she was again adopted by a family. But as fate has it again disappointment was waiting for her. This time the family moved away and decided not to carry the canine with them. So the same thing happened to Maggie again. She was homeless and back to the Town of Hempstead Animal Shelter.

Once is unlucky, twice is carelessness, three times is a charm. Maggie might be disheartened by these rejections but destiny has another way for Maggie.

Her high energy level which made her unfit for a family earned her a place in the police department. She is perfect for police work. She started working for the Owega Police Department after she was trained by the Southern Tier Police Canine Association. This association works for shelter dogs and trains them and gives them for free.

Most police dogs are very costly and cost over $10,000 and they come from abroad. Many departments can not afford such costly dogs. So the Southern Tier Police Canine Association is helping those departments.

At last, Maggie got the appreciation and love that she deserved.