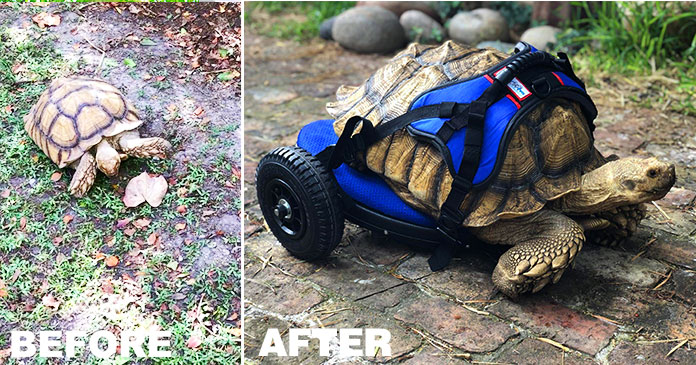 Life is very hard for people with disabilities. But if we talk about animals, they too face great difficulty. Luckily there are people who are willing to come and help these types of animals. They give them those facilities which make their life comfortable and easy.

For giant tortoise who was suffering from a disease which made it quite difficult for it to move. But thanks to one group which helped him and provided him his very own wheelchair.

The tortoise named George Bailey who is an 11-year old Sulcata tortoise was born with a condition called metabolic bone disease which made his rear legs underdevelop.

According to Walkin’ Pets, the condition affects mostly reptiles who are kept in captivity due to an imbalance of calcium and phosphorus.

According to Jaime who rescued the tortoise, the tortoise used his front legs to move around slowly and clumsily. This problem increased with size as currently, the weight is close to 70 lbs but it may grow up to over 200 lbs.

As a tortoise can live up to 100 years, so it may so happen that the tortoise would soon become immobile for the rest of his life. But they found a solution to it. Walkin’ Pets is a group that cares for aging and disabled animals. 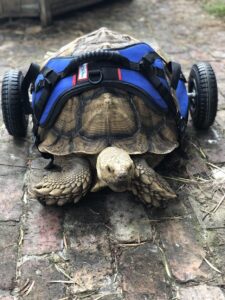 When Jaime came to know that Walkin’ Pets had earlier helped an injured turtle named Scoot Reeves by getting it a wheelchair, she thought they might be able to help George.

So George got his own wheelchair which was made from a mobility scooter and a harness that was wrapped around his shell. At last, George was on the move and for the first time, he was able to move around comfortably.

This was a wonderful way to help the disabled tortoise and with it, George Bailey would be very comfortable.