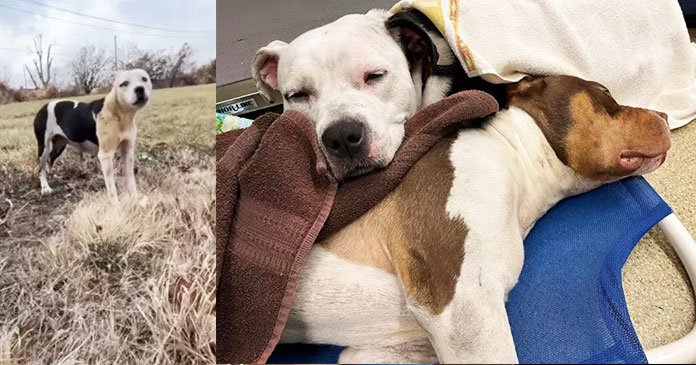 No one can question the loyalty of dogs. They form real and true friendship with other animals as well as human beings. They never leave their side even in the difficult situations. Recently one stray dog proved that true love and friendship exist among the dogs. He refused to leave her best friend’s side after he was hit by a car.

As told by Stray Rescue of St. Louis, a stray dog was hit by a vehicle on highway 70. Rescue employee was passing by and when he saw the crowd gathered, he stopped for helping the injured dog. The dog was hurt very badly and his best friend a fellow stray dog was not leaving his side. The dog continude to be with his friend.

The rescues had to assure her that they came to help her friend. The shelter named the injured dog ‘Soul’ and his friend ‘Heart’.  Unfortunately, Soul fatally injured and he suffered a broken back and the rescue found that there was no way to fix it.

According to Natalie Thomson from Stray Rescue, they would do what it took to save a life but if there was no chance at quality of life the kindest thing was to say goodbye. They tried to relieve Soul’s pain in his final moments.
Seeing the love and devotion of Heart for her best friend Soul everyone was touched and they are now working on a special way in which Heart would remember her friend forever.

The shelter is thinking that they would get a pendant for her collar that will hold some of Soul’s ashes so that she could always carry him with her. As both the dogs were not having any collars or microchips so it was assumed that both of them were stray. Heart looked very dirty.

So the rescue gave the dog a bath and they have committed themselves to give the dog all the love and care that she deserves. Soul passed away but his friend did not leave his side. According to Thomson, they kept her with them the entire time, hoping that she would understand what was happening. Goodbye Soul! You had a very loving and true friendship with Heart. We wish Heart to remain strong.