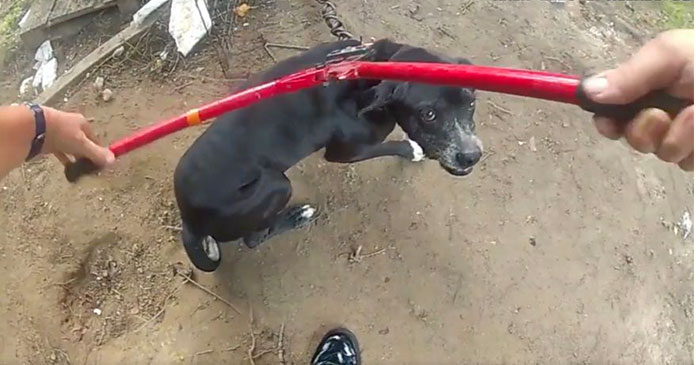 Many people inspire us by doing exceptionally well. These heroes go out of their way to save an animal’s life. At times they are even ready to put their lives in danger.

Here our heroes are two deputies, who braved the heat of a blazing fire to save the lives of two chained-up dogs.

As the deputies from the Candler County Sheriff’s Office, in Georgia got a call about an explosion that caused three fires, including a car and an RV, they rushed there to help.

When they reached the scene, Capt. Jamey O’Brien saw some movement behind the RV and saw the two chained-up dogs in need of saving.

It was soon clear that the dogs needed to be saved immediately, so the deputies hurried to free the dogs. They did not care about the scorching heat of the burning fire. According to deputy Elliot Coursey, if they did not go, those two dogs would have been cooked alive.

This footage was recorded and the video shows the officers racing to free the pets. One of the officers removed the dog’s collar to free it from a chain while the other opened a metal crate to free another dog.

The dogs were rescued on time. The dogs ran away and were happy to be away from the severe heat and smoke.

The rescued dogs were taken to foster care and both the dogs recovered after receiving medical treatment. The dramatic rescue video went viral and was seen by over 3.5 million views.

Thank you officers for saving the dog’s life.watch video