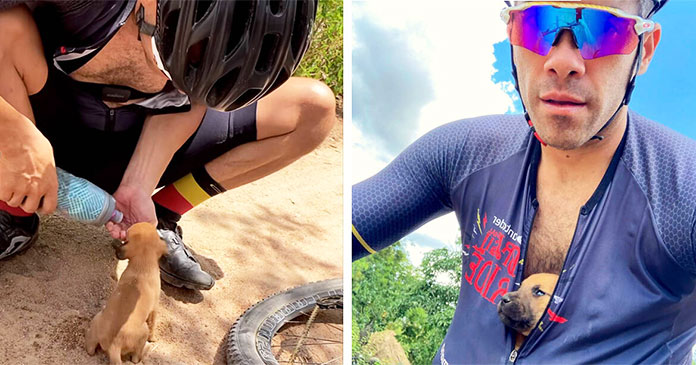 Stories of people going out of their ways to help animals always warm one’s heart. The satisfaction one drives by helping the animals in need has no substitution. So here is an incident where a cyclist found five puppies abandoned and left, he went above and beyond to help them.

He gave them a ride and helped them in finding their homes. Tyago Costa Silva who is a professional cyclist from Brazil never expected that he would come across such kind of saddening sight in the middle of nowhere which would lead them to change their course.

Tyago found five puppies buried in a hole. He said that someone dug the hole and left them there to die. The puppies were weak and unable to escape. The sad situation of the puppies left the cyclists in shock and they were unable to believe that someone could be so cruel as to do such a thing.

So the cyclists knew they had to help. They pulled out the puppies and gave them food and water. A video posted on Tyago’s Instagram account shows him giving water from his bottle to the thirsty pups. Not only they provide water to the puppies but also carried them 12 miles by putting them in their shirts.

Tyago even took the five puppies to his home to provide them with more care. According to Tyago he got very emotional and took them home to care for them. He said that he could not believe that people could be so cruel. He said that he hoped that the puppies get homes with good owners.

Luckily the puppies sad story has a happy ending. All the five puppies found their forever homes. The cyclist received lot of praise for his work. He said that he did what was right. Thank you Tyago and his friends for helping the puppies.