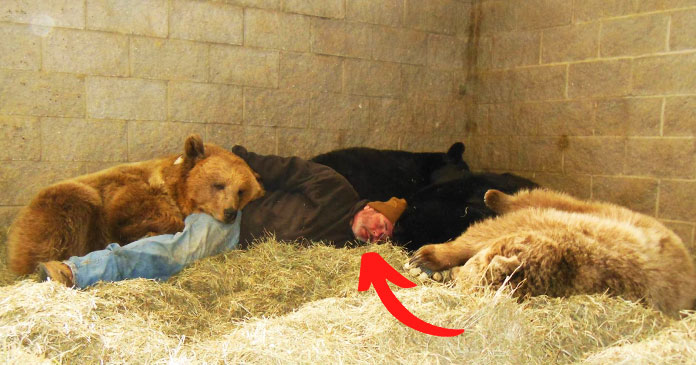 Some people’s devotion towards animals is totally unquestionable. They can go to any level to prove their love for the animals. They go above and beyond to make sure that wild animals are kept safe.

Here is this devoted wildlife keeper who is willing to do everything only for the sake of the four bears that he cares for and in order to make their life comfortable. He even sleeps next to them to make them comfortable.

Jim Kowalczik has a great love for wild animals and he constantly tried to help them and protect them. He is especially having a soft corner for the bears. In order to help each and every bear cub in need,

Jim and his wife Susan founded the Orphaned Wildlife Center which is a rehabilitation center for orphaned bears in Otisville, New York. 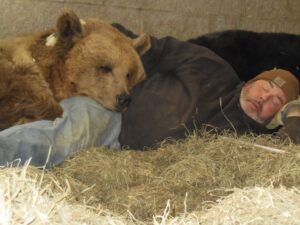 He started taking care of many bears in 1990 and so far helped many bears in need. But Jim developed a strong bond with his favourite four bears: two Kokiak bears and two Syrian bears.

These four bears arrived at the center nearly a decade ago and in this time period, they developed a special bond with the man that looks after them.

The relationship between the bears and man is very unique and special as Jim takes napes with them just to put them to sleep. It shows how close they are and what type of relationship they have.

It is not that they only sleep side by side but they even do all sorts of fun activities together. Really the man is really great and the work he is doing for the bears is amazing.