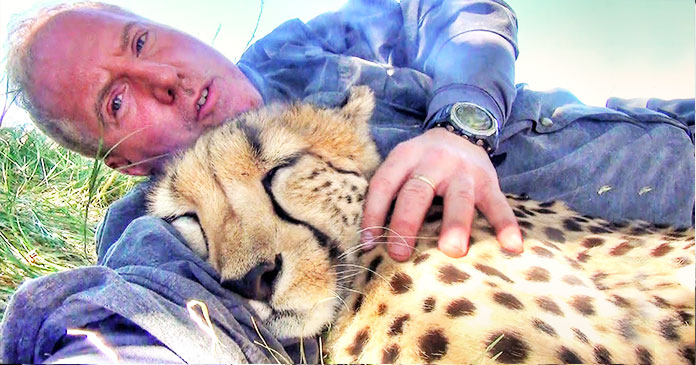 Animals start feeling connected with human beings if they find they are kind. They start treating them as their own kind. Sometimes this kind of connection leads to a good friendship.

Like the friendship between wildlife photographer and zoologist Dolph c. Volker and a cheetah named Eden. Their bond is so strong that Eden looks at Dolph as if he belongs to the same species as her. She cuddles and snuggles with him. 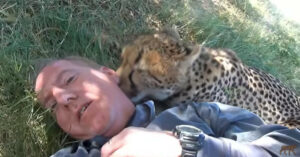 Photographer Dolph was dealing with the personal loss of his beloved dog and he was unable to bear the loss. So he decided to devote the rest of his days to the service of animals.

His first priority is animals and he is fighting for their rights. He is a true conservationist and he raises awareness for endangered species. He works as a volunteer at the Cheetah Experience in South Africa. He has made many efforts for the protection of species.

As a result, these wild cats started loving Dolph. As he was on one of his trips, he was very tired after a long day and decided to take a nap under a tree. At that time, a cheetah named Eden saw Dolph and she came to him and decided to cuddle with the harmless human. 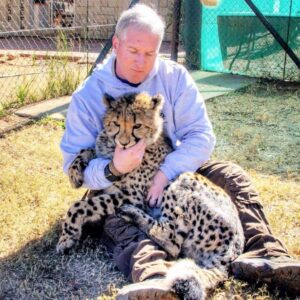 As Dolph woke up, he was totally taken aback when he saw the big cat sleeping next to him. And that was the starting of their beautiful friendship.

They share such a strong bond that Dolph is now regarded as ‘The Cheetah Whisperer’ as he spends most of his time in the company of Cheetah.

This is the most adorable friendship. We are happy that Dolph has dedicated his life to the betterment of animals.