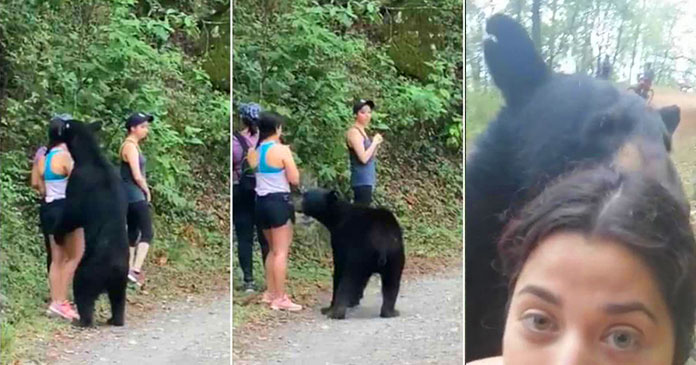 Encounters with wild animals are both scary and memorable. They become memorable when everything is pleasant and even we are acting according to the situation, keeping our calm.

They are scary as when we come face to face with such huge and dreaded creatures, most of the time we don’t know what to do.

A lot of videos might be watched by you showing the bears playing around. Many times they are seen sharing food with human beings or having fun in the swimming pool. All this looks very funny and adorable only in the videos as when they come in front of us in reality, that’s actually frightening.

The three hikers in Mexico faced this situation as they went hiking in Chipinque Ecological Park in San Pedro Garza Garcia. The curious bear approached the women and the women were totally astounded and stood frozen in fear.

There is this heart-stopping video that shows how eager the bear was and how calm the women were. The bear just wanted to sniff one woman’s hair and inspect her. The bear was standing on his hind legs and was seen sniffing the hair of the woman.

It was quite fortunate that no one got hurt. One of the women who was being sniffed got the chance and she took a quick selfie with the bear. 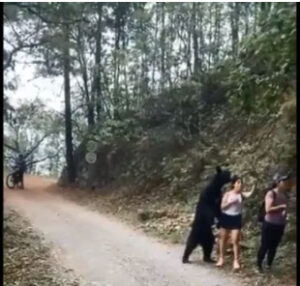 Really it was a grave situation as anything could have happened. The government of Nuevo Leon has given advice to people on how to act when caught in such a situation.

One has to stay calm and never do these things: feed the bears, stand between a baby and its mother, and photograph or take selfies with them.

There is a mixed reaction about the woman taking selfies. Some people are angry and called it a foolish act, while others praised her calling her a brave girl. A few also wrote that it’s “irresponsible” for someone to take a selfie in such a situation because The click of the camera could scare a bear.