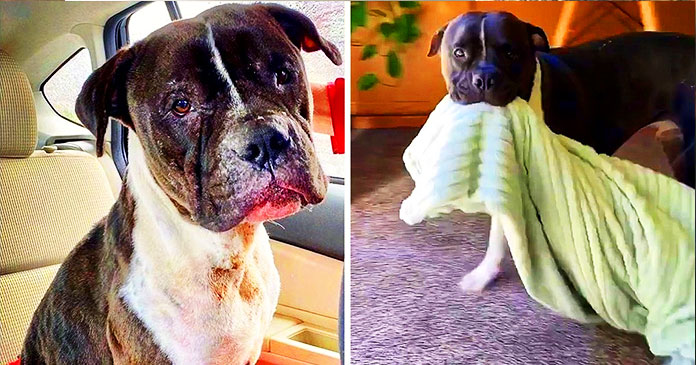 Sometimes animals suffer a lot that when they are cared for and looked after, they did not want to lose that kindness shown to them.

Bubby the pit bull was also having the same story of suffering. He was just a puppy when he was being used as a bait dog by a dogfighting ring. At the time when he was rescued, he was physically and mentally traumatized.

He was frightened as his emaciated body was punctured and infected all over. His wounds were rotting and he was extremely shut down and was to be euthanized. 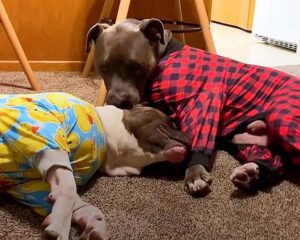 Though Bubby was saved from euthanization, yet his troubles did not end there. For the next 2 months, he was locked in a garage. Finally, a woman heard about his plight and adopted him without thinking for a moment.

But his life changed for good as he received love and care for the first time from his new mom. She loved him a lot and over the months, he made an unbelievable physical and mental recovery. He became very attached to the woman who saved her.

Bubby’s owner decided to crate train him in order to give him a sense of security in the house. During the crate training, the dog found a feeling of comfort in blankets. So he started carrying blankets around the house.

He started considering his blanket as a safety shield. With time, he developed a similar devotion for his pillows, toys also. 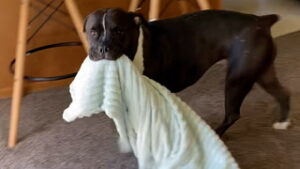 Soon the family adopted another pit bull named Simon to keep him company and it was the best gift, he ever had. The family thought with Simon around, Bubby would give up his blanket obsession but that never happened.

The adorable thing is that even Simon started copying Bubby and started carrying a blanket like his brother.

Thanks to the woman who helped Bubby to cope up with the past trauma.