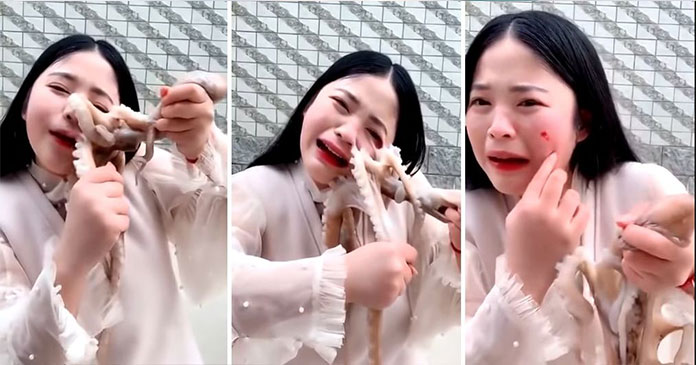 In order to gain popularity, many people can go to any extend. They throw silly challenges and try to complete them. In live streaming, if they successfully complete any challenge, it improves their viewership and they become famous.

The same thing happened to a Chinese Vlogger named Seaside Girl Little Seven who lives in a city called Lianyungang. She regularly posts clips of her eating live seafood. Her followers know that she loves to eat seafood.

This time as she tried to eat an octopus alive, she was attacked by it. This video gained great popularity. The woman also posted the video to become famous.

She tried to do something unique to get the attention of more people. Though this time the video became popular, it was not the way the woman expected it to.

The clip was only 50 seconds. It was shared on a very famous short video platform named Kuaishou. In the video, the girl was seen fighting with the 8 armed creature alive.

The octopus was seen defending itself by sticking to her face with the help of its suckers. The girl was seen experiencing much pain and crying as she was trying to remove the suckers of the sea animal that grabbed her face with its tentacles.

The viewers were in great shock as they witnessed the video. The octopus was not leaving the face of the girl, her face became severely distorted in the process. This happened as the girl introduced a new challenge of eating an octopus alive.

The video helped the vlogger in no way. She was left bruised and in great pain. It became a type of horror clip as the people were shocked to hear the shrieks of the woman in pain.

The vlogger began her career almost 2 years ago. She recorded several videos of herself eating different varieties of seafood. Though she started her live streaming channel, yet she was not able to get as much attention as she wanted in her short career. In one of her earlier videos, she asked her fans about what was the reason that her videos are not trending.

It is believed that the motive of making this shocking video is to gain enough viewership and popularity. She ended the video by saying that in her next video, she would complete her challenge.

Regarding the popularity of this video, she was very happy as she received some amount of stardom owing to this video. But this video did not go down well with the animal lovers as they thought it was cheap popularity.

No one can become famous by hurting an animal. Watch video