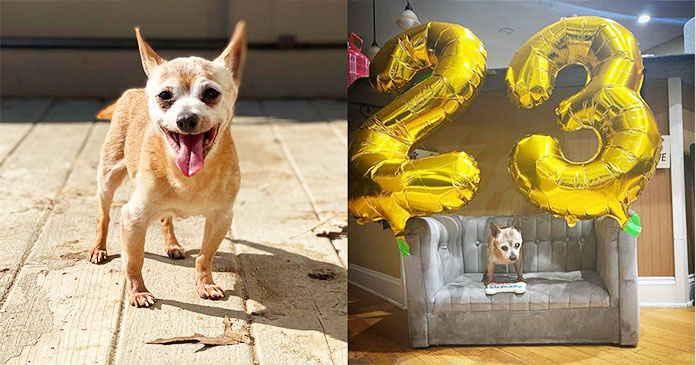 It is very sad to know that Dogs are not having long lives but still, there are ones who are blessed with long lives. Once a dog becomes a senior, every birthday becomes very special.

So when one sweet rescue dog turns 23 which is good age in dog years, he got a very special birthday party to celebrate this milestone.

The name of the dog is Bully which is a Chihuahua and at the age of 21, he had a major life change. His elderly owner was not able to look after him so the dog was surrendered to the senior dog rescue The Mr. Mo Project.

At such an old age, it is very difficult for dogs to make adjustments but Bully also known as Bobo has adjusted very well to his new home. He has passed the life expectancy of Chihuahuas.

According to Chris Hughes, a Bully is feisty, naughty, sweet, independent, gentle, and calm he has an old man bark, and even at this age, he likes to push around another one of the Chihuahuas.

At present, Bully is one of the oldest residents of the rescue and when he reached his 23rd birthday, the rescue made sure to celebrate the birthday in style.

Bully was born on April 5, 1999, and he lived through two millenniums. Though his birthday demands a big splash yet the dog preferred a low-key celebration. According to Hughes, he does not have too many teeth, so they soft biscuits and crumbled them up so that he could enjoy them. He likes to sleep so that was the best gift for him.

The Mr. Mo Project was started by Chris Hughes with his wife Mariesa and they have a special place for senior dogs in their hearts. They started caring for a 12-year-old dog named Moses who came to them as he was very old and he inspired them to start the rescue.

According to Chris Hughes, they get a lot of dogs that were overlooked. They had bad legs, bad teeth, crusted eyes and they were matted. But they still have life to them.

In their rescue, they have seen many senior dogs come and go and they always make sure to celebrate the dog’s big life milestones.

It was really an incredible achievement for a dog to live to 23.