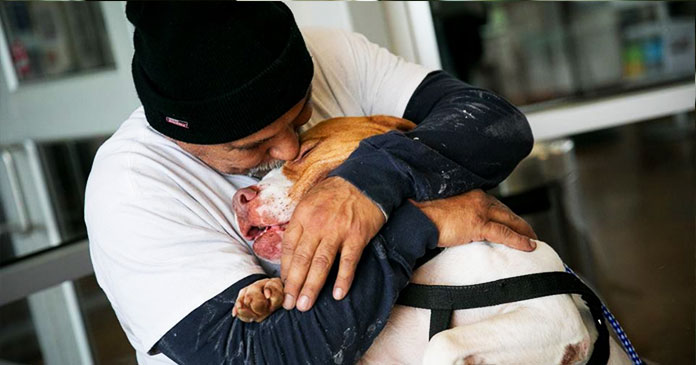 Animals are our best companions especially dogs. They give us the company that we desire for. But what will happen if unwillingly we have to surrender the dog which is life. That is the toughest part and we only know that it could make our life very difficult.Here is an incident where a man named Lewis had to return the animal back to the shelter and the reason was that one of the neighbors was not happy with the dog.

Lewis when he was looking for the dog, went to the Austin Animal Shelter and he was able to find the dog with whom he had the direct connection.

It was an 8-month-old pup and it was a pit bull breed and he named it Titus. These dogs had the reputation of being very difficult that also due to some people.

So when Lewis brought the pup, many issues started coming. The problem did not come from the dog but from the people of the apartment complex. The dog was adopted in 2013 but after some years, the problems became very big and it ended terribly.

Lewis did everything,  he could do to make things work and to make an amicable environment for everyone. But nothing worked. That person was after Titus and he wanted to get rid of Titus as soon as possible.

So as destiny have it, one day Lewis’s 10-year-old grandson took Titus on a walk. The neighbor claimed that the dog attacked him and nipped the tip of his finger.

Lewis had nothing to prove and he did what he could do at that time. He took the dog back to the shelter. This thing broke his heart as he lived with the dog for four years now. But he took the pledge to bring his dog back. He visited the dog every time to meet him.